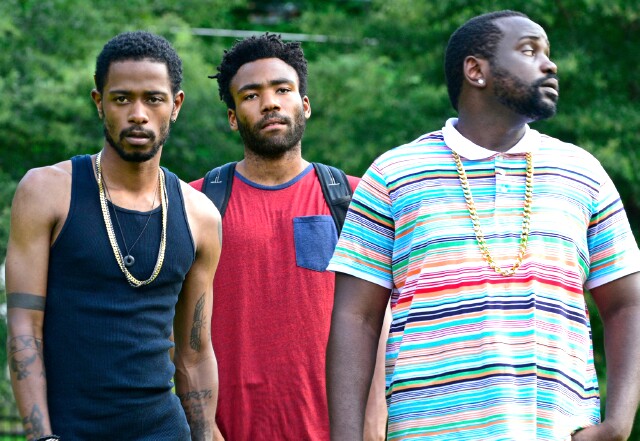 I appreciated FX’s dynamic new comedy from Donald Glover right from the first episode, because while I found it funny, and at times powerfully disturbing (which is in itself a tantalizing combination), it also felt unarguably authentic, a quality missing from more television shows (including the better ones) than one might think.  It never for a minute felt like something that was conceived in a writers’ room or victimized by network and studio notes (though it may have been, because who really knows). It felt real, even to someone who has no first-hand knowledge of rap music, economic desperation or the neighborhoods of Atlanta, where the show is set. I hadn’t had that response to a comedy since the premiere of HBO’s Girls though, again, I know next to nothing about why Millennials behave the way they do, especially those of the Brooklyn variety. There are similarities: Both shows play out in urban settings, and both star the person who created the series. The difference is that I find the characters in Girls to be largely detestable and exasperating; but I like most of the folks I have come to know in Atlanta, especially well-intentioned f**k-up Earn, played by Glover himself.

As great as it was from the beginning, Atlanta only got better, taking all kinds of unexpected chances as it rolled along, at one point side-tracking into an episode-long satire of a talk show that still advanced the story of Earn’s rapper cousin Paper-Boi (Brian Tyree Henry, pictured at top right with co-star Lakeith Stanfield and Glover).  Plus: Black Bieber.  Amid the fun of it all came shocking moments in which people were gunned down, signaling that this was a show not to be missed, nor allowed to stack up on the DVR.

I’ve written a bit about this show, and I’ve read a lot. But I haven’t come across anyone who positioned it as well as critic Ainsley Andrade in his first column here at MediaVillage.com. Here is a quick cut-down:

FX's “Atlanta” feels less like a TV show and more like a record -- that is to say, it feels more like a Childish Gambino album.  As someone who’s been following Donald Glover’s acting career since Season 1 of “Community” and his music career since the release of his EP, titled EP (released in 2011), I’ve found that if when describing the first season of “Atlanta” you try to put it in a box (dark comedy, sitcom, whatever) you limit yourself to descriptions that are not as accurate as you think. This makes perfect sense – because Glover has never allowed himself to be boxed in, regardless of the medium.

Take a look at his musical career overall and it’s easy to see that Glover’s been on a journey of self-discovery, constantly shedding the previous conceptions of himself with every iteration of his work. Like many artists he yearns for the world to understand him and see things from his unique point of view, while at the same time maintaining the somber understanding that not everyone’s going to get it – or him.  His work doubles as a commentary on life as he sees it, and has had to live it, and in doing so has become a diary of sorts … his thoughts, fears and desires, all lying naked on the page. That's what listening to a Childish Gambino album is like, and Atlanta achieves a similar feeling. It’s not a microcosm of the “black experience” any more than “Friends” was designed to show what it’s like to be white. It’s his experience, filtered through the lives and eyes of his characters. It’s a story about what could be real people, in what is definitely a real place, and how they deal with the real circumstances the universe saw fit to drop in their laps -- all with a very Gambino spin.

Ainsley’s accolades aside, there are many reasons why Atlanta will be long remembered as a breakthrough series, but up at the top of that list will be its proclivity to drop F-bombs like ducks from the sky during hunting season. The Big F has been used before in advertiser-supported programming, but never with such frequency. Indeed, the repeated use of that word makes Atlanta flow far smoother than it would if its characters didn’t use it so freely, because that’s who they are and where they are and how they are, and its absence would be false, not to mention utterly jarring.

To drop the A-word again, authenticity is everything.