Broadcast Comedies Excel as They Tackle the Many Miseries of 2020 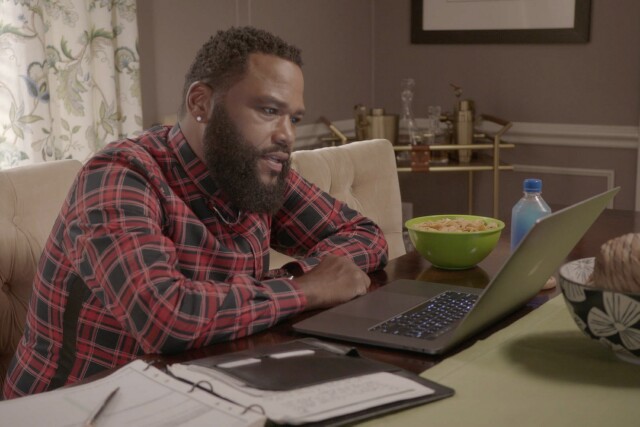 That was advertising executive Dre Johnson, played by Anthony Anderson (pictured at top), narrating the final sequence of a recent episode of the ABC comedy black-ish. He was referring to how he had mismanaged several personal and professional responsibilities in the early weeks of our prolonged pandemic. (Among them, trying to convince his family that being a "senior advertising executive" made him "an essential worker" because, as he declared, "I make inspirational commercials that give people hope!" His loved ones didn't buy it.)

In terms of finding a path through the pandemic, Anderson (as Dre) could have been speaking about his show or his network – or, for that matter, all of television. Now that some semblance of a traditional television season is finally underway, one can't help but be impressed with how the production community has adapted to the demands of our new abnormal. From such live competition shows as ABC's Dancing with the Stars and NBC's The Voice to the shattering personal drama that electrified the two-hour season premiere of NBC's This Is Us, the work on the screen and the real-life realities of production during what seemed as recently as April to be a universally impossible long-term situation reflects an industry that is capable of managing even the most daunting of challenges.

This is also true of much programming on cable, in particular the new Christmas movies already running on Hallmark Channel, Hallmark Movies & Mysteries, Lifetime and UPtv. Many were produced during the pandemic, but you wouldn't know it when watching.

But I'm talking about broadcast in this column, and damn is it impressive these days, from its scripted primetime programming and daytime dramas to its news and sports coverage to its reality fare (live or on tape). In terms of content, it's the situation comedies that are standing out at this dreadfully dark time, somehow remaining funny and entertaining while taking on the multiple messes of 2020, about which there is nothing humorous at all. The genre hasn't been this rewarding since the early '70s, when it was largely defined by the progressively abrasive reality of All in the Family and other Norman Lear comedies and the remarkable cultural reflections in pretty much everything produced by MTM Enterprises.

Although it has always excelled at addressing tough contemporary topics while keeping the comedy quotient high in every episode, black-ish has never been better than it is right now. In fact, two recent scenes with the Johnsons had the same impact as some of the more memorable moments in the Bunker household. The first, and most dramatic, found Dr. Rainbow Johnson, played by Tracee Ellis Ross, letting her son Junior have it when she returned home from a grueling shift at the hospital caring for COVID patients and learned that he had been violating quarantine by sneaking his girlfriend Olivia into their home. Junior was predictably casual about it, even lying at first. Refreshingly, Bow blew up, and there was no sappy apology afterward.

"I'm afraid, Junior! I'm afraid!" she continued. "I'm doing everything I can to protect myself and my patients and my family and you're jeopardizing all of it just to see your girlfriend! It is so hard when people won't do the simple thing for the greater good. And it's even harder when my own son won't do his part." (I can't even count the number of people I have run into since the pandemic began who deserve to hear exactly that.)

"It’s going to be okay," Junior replied, clearly not getting it. "We're gonna look back on this and say, 'I can't believe I was there.'"

"I'm not going to want to look back, Junior," Bow said, her voice a mix of disgust, despair and defeat.

In another sequence, Dre lost it after taking delivery of a grocery order because the cookies in the bag weren't right. Indeed, nothing was right. Earlier he had lamented about missing Starbucks during his "five-second COVID commute" from the kitchen to the dining room table (where his laptop was waiting). He had ordered Oreos, but received generic sandwich cookies, and when this sunk in, he lost his shit, crying and smashing the offensive wannabe treats.

"I wish this was 2019 when I could just eat samples at the grocery store!" he cried. (That may be the best line in any comedy this year.)

Bow later surmised of living in the pandemic, "This is too much for anyone," succinctly speaking for us all. 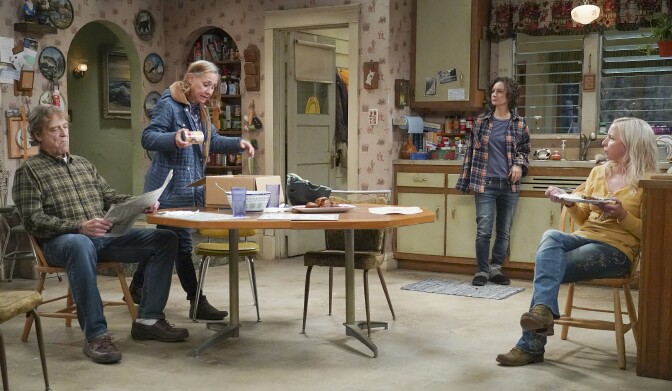 The extreme opposite of the well-off Johnsons is the hardscrabble family at the center of ABC's The Conners pictured above), which has also been creatively galvanized by the pandemic and everything that has gone down since it began. They're wearing masks and shields, sitting six feet apart when eating in their kitchen and losing their jobs because the economy has been so egregiously compromised. In fact, in the season premiere life had become so bleak that widower Dan received an eviction notice from the bank, while daughters Becky and Darlene, who once hoped to do better than their folks, took jobs on the same assembly line where mom Roseanne once worked to help dad pay the bills.

In an especially moving moment, aspiring writer Darlene (Sara Gilbert) broke down when telling Becky that she had realized she will never fulfill her longtime dream of becoming a writer. Basically, life won't let her go there. It looked for a hot minute as though she might launch a successful small-town online magazine, but the virus killed that.

Life was never easy for the Conner family. The original Roseanne ran from 1988-97, a time of devastating recessions when the rich got richer and the working class hit bottom. That seems so long ago, but as The Conners continues to illustrate, the more things change, the more things stay the same, or worsen. In that regard it may be the most tuned-in family sitcom of our time. 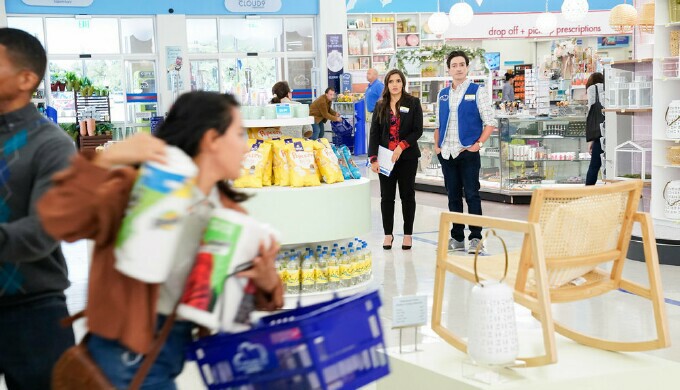 Meanwhile, NBC's Superstore(pictured above) may be the most reliable workplace comedy of the day. The storyline in the season six premiere began in March, as various staffers began receiving alarming reports on their phones and in person. The NBA has canceled its season! Tom Hanks has the virus! People are hoarding cases of toilet paper! The café in the store has been shut down!

As time passes the anxieties continue to mount. Plans are put in place to protect the store from looters. News of murder hornets terrifies everyone. Zoom meetings increasingly take over the life of manager Amy (America Ferrera), making it impossible for her to do her job as efficiently and effectively as before. The parking lot becomes littered with hazardous used gloves and face masks. Staffers leave work early to attend BLM protests. Netflix's Tiger King is dismissed as "early pandemic."

Remember what Bow Johnson said about the future? I don't want to look back, either ... not even to April. But I sure look forward to looking forward, especially as life plays out on these and other shows. The end of the pandemic may be farther off than any of us care to acknowledge, but as these programs and others (including CBS' stable of smart, issue-driven sitcoms, especially Mom and The Neighborhood) continue to explore the troubles of our times, at least something will feel real, if not all too familiar.