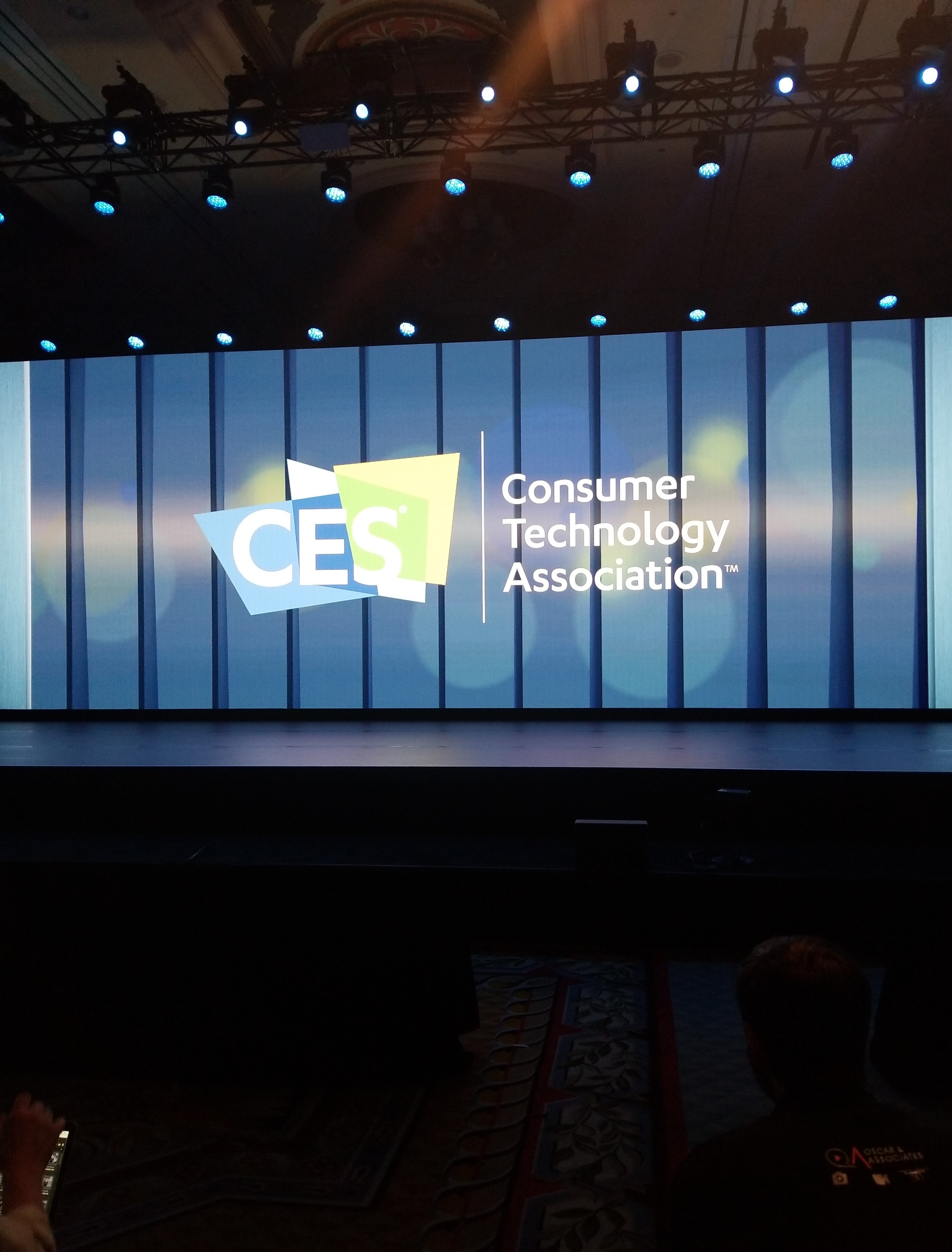 Unlike most of the "futurist pundits" out there, I need a bit of time to absorb everything I see at CES to grasp and interpolate the complex layers of what I experienced. I try to come in, not with preconceived notions, but long-term perspective, given my many years of attending the show.

I've been tracking comments from my peers who attended, which ranged from "uninspiring" to "amazing." While I don't go to CES to solely be wowed by tech, make no mistake, I love it, and there were numerous innovations that wowed me. (No, the Charmin-Bot was not one of them.) As someone who has attended for the better part of 18 years, I pay close attention to the show's evolution and the underlying messages about our consumer adoption, culture, and the macro-level role that technology will play in our lives over the next five to 10 years. What I saw this year both thrilled and scared me in a very real way. While the future is amazing, the path there — for the future of well-paying jobs — is another story.

Here are some of my key takeaways from CES 2020 in part one of my two-part series:

The shift to 8K was inevitable but, for the majority of TV owners and buyers, it is really a meaningless marketing tool. According to the Consumer Tech Association, over half of the 40 million televisions projected to be sold in 2020 will be 4K and 21 percent of LCD screens sold in 2020 will be 65" or larger. If you are buying a 75" screen and sit REALLY close to the screen, perhaps, 8K will mean something to you. If you don't sit so close, then you'll be just fine with a 4K set with a good refresh rate and HDR — both of which are more important than pixel density. And if you have anything smaller than a 55", you don't even really need 4K.

If you do ignore this and get an 8K TV, recognize that there is already very little content available in 4K, outside of some movies on Amazon and Netflix. There is, and will be, practically no native 8K content outside of some 2020 Olympic footage that NHK is filming this year or likely the next. Despite all this, there will be 8K sets out this year from practically every single manufacturer.

One quick note: There really wasn't much happening on the TV front, although the Samsung Q950TS, its almost completely bezel-less set (the bezels are 2.3-millimeter per side, but otherwise pure screen), is incredibly beautiful. However, this "Infinity Screen" TV is 8K; please refer above. The Samsung Sero, which does have a bezel, also has a nifty trick: it can pivot from landscape to portrait. So, if you are obsessed with vertical video a la Snaps, then this could be a TV for you.

CES 2019 was an all-out battle between AIs, with Google and Amazon taking exponentially larger spaces to highlight both the use cases and partners within which Google Assistant and Alexa were embedded. This year, both main players kept the same floor locations and space, but the focus was clearly on use cases, with a more limited controlled view of partners. Both had spaces that were designed to take you through life moments and areas of your home where Assistant and Alexa can enhance your life.

Amazon focused on major announcements about Alexa's auto integration with brands such as Lamborghini and Rivian All-Electric vehicles R1S and R1T. Amazon also announced that Echo Auto, the device that brings Alexa into their car, will launch globally this year — though it has been available in the U.S. for the past year.

By April of this year, U.S. Echo Auto users will be able to pay at over 11,500 Exxon Mobil stations just by telling Alexa to pay the bill. Additionally, Amazon has partnered with Fiat Chrysler and BMW to bring FireTV Edition for Auto to some of their cars. Passengers will be able to stream from Amazon Prime, FreeTime, Netflix, and shows recorded with FireTV Recast via this technology. 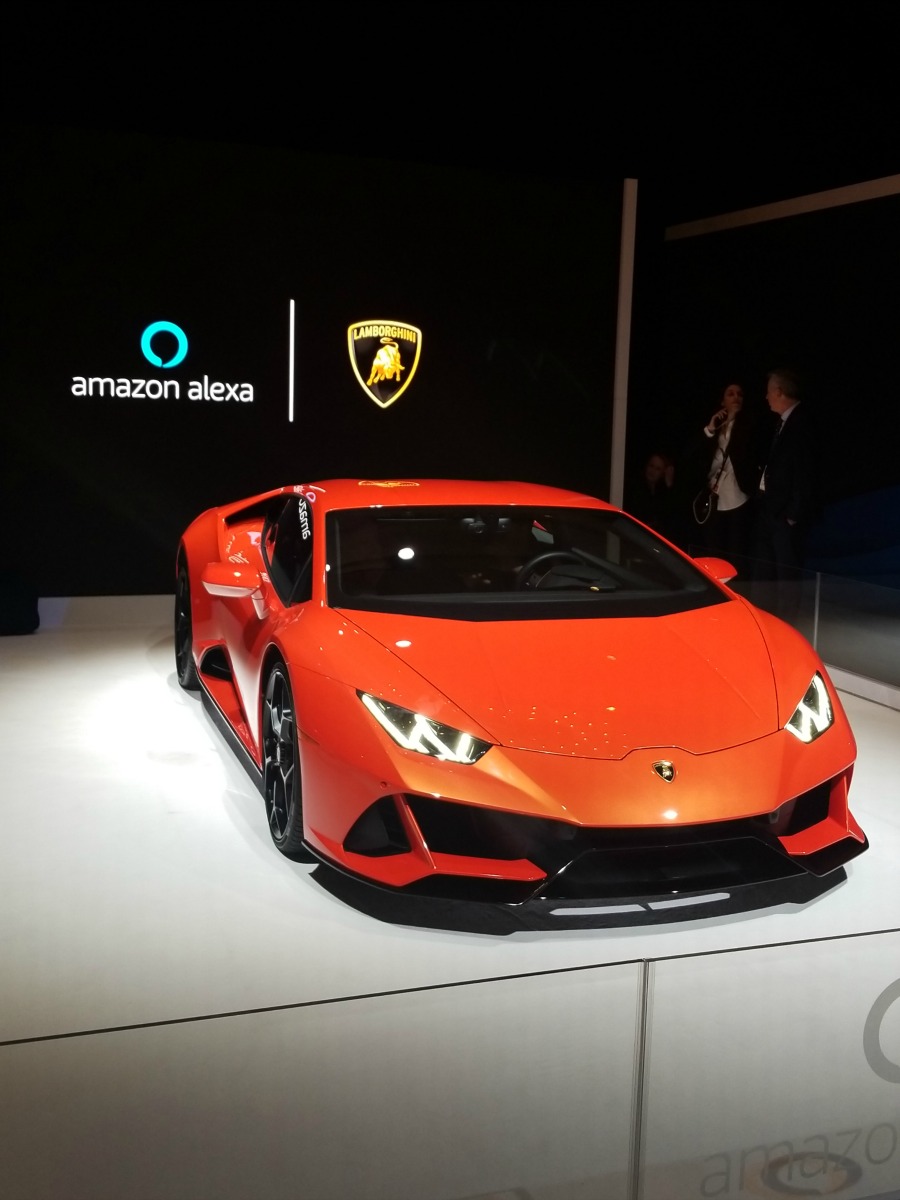 CES clearly demonstrated that AI is getting more predictive and proactive. I wasn't a huge fan of the now-defunct Amazon Dash buttons, yet, here I am, intrigued by Amazon Dash Replenishment (ADR). There are various devices and partners that have integrated ADR, which monitors product usage, recognizes when inventory levels are low, and then automatically reorders the product.

For example, when your HP printer gets low on ink, the replacement cartridges will magically appear on your doorstep. If your Air Wick fragrance starting to fade in your Essential Mist Bluetooth-enabled diffuser, no worries. The replacement fragrance will just arrive all on its own. At CES, RB announced four new products will ADR integration: Enfamil Infant Formula, Finish Dishwasher Tablets, SmartCap, and the aforementioned Air Wick Essential Mist Bluetooth.

While I am still not 100 percent sold on its usefulness in the home, for business office managers, it will take some of the friction out of having to monitor and reorder office products such as ink and toner, kitchen supplies, and paper, in addition to being able to more accurately quantify usage rates. 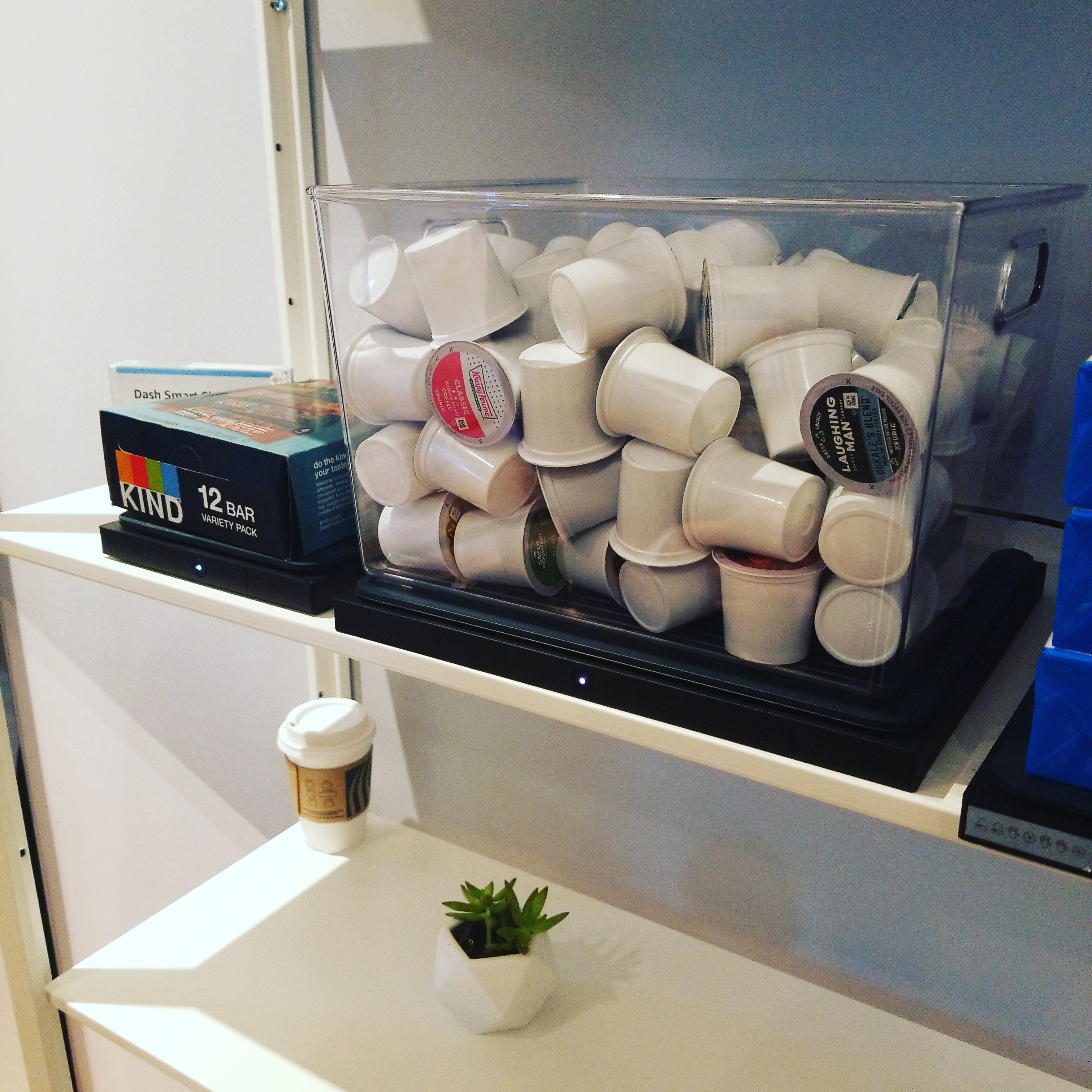 One of the more interesting AI-enabled technologies is a company called Dabby, which is claiming to be the first "smart" streaming, OTT service. To be clear, I do not believe that Dabby will find much success as a hardware product with consumers. Its cost, out of the box, is $399, which is never going to work given the sub-$100 of streaming devices such as Roku and Amazon FireTV. The Dabby software, though, is incredibly impressive. In a nutshell, Dabby can search across all your streaming services for the content that you are looking to view. I'm not just talking full shows or episodes; you can ask Dabby to search for a specific clip segment from a specific movie and it will find it. Being a cross between skeptic and a geek, I asked Dabby to find a scene from the newer Battlestar Galactica where the Cylons attacked the humans and, sure enough, within seconds, the screen was showing the clip.

On a more practical level, Dabby can monitor your streaming service usage. If Dabby recognizes that you haven't used one of the streaming services in your portfolio in a reasonable amount of time, it can either alert you or automatically cancel the service for you. In this era of no-contract, no-obligation streaming services, plus the laziness factor of human nature, Dabby could save a consumer serious money. I see no reason why Dabby couldn't be a perfectly amazing phone app that is synced with my streaming devices.

Finally, there is Neon, a company funded by Samsung's research division, STAR Labs. Neons are photo-realistic human avatars with conversationally-enabled artificial intelligence. This takes deep fake to an entirely different level. I can see many jobs being disrupted, including hotel concierge, rental car attendants, QSR counter service, and thousands of government bureaucratic roles. Neon is still in beta, but it gets closer than anything I've seen to passing the Turing test (the point where you cannot identify if you are speaking to a human or a computer). 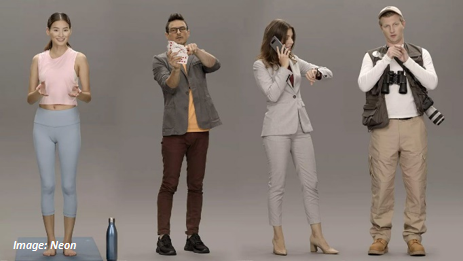 There is little question that China took CES by storm. Although phase one of the U.S./China trade agreement was only recently signed, Chinese TV, mobile, and smart home companies' commitment to attend CES was clearly not impacted by the trade war; over 1,000 Chinese vendors attended CES 2020.

In the past, Central Hall was dominated by Japanese (Sony) and Korean (LG and Samsung) TV manufacturers. About 10 years ago, Chinese companies such as TCL, Haier, and Hisense, started to appear with smaller convention space and second-tier quality product. Fast-forward to today and Chinese-based brands dominated Central Hall, even displacing (or filling) Intel's massive booth. The TV quality on Chinese sets is almost up to the same level as Samsung and Sony, with TCL having found quite a bit of success in the U.S. with its brilliant integration of the Roku OS. According to NPD, TCL sales volume ranked number two, with a 16.5 percent share in the U.S.

Chinese company Skyworth is making a massive push into the U.S. in 2020. It showcased its 8K and paper-thin OLED sets, as well as highlighted its transparent LED technology, which was a head-turner.

As with all modern televisions, most of the Chinese-brand televisions are smart TVs and are collecting viewership data and TV app-usage data. The ascent of China in the smart TV space is a cause of great concern, not just as a true competitive threat to Korean and Japanese manufacturers, but from the perspective of data collection. Just as the U.S. has taken a strict and close look at the popular social media app, TikTok, given its China ownership, there could be real issues with China having access to second-by-second HH television viewing usage (which also includes every device attached to that TV). In a subsequent column, I will be discussing this issue in-depth.

The Launch of NextGen TV

Last year, the ATSC 3.0 standard that governs over-the-air digital transmission standards of television was ratified at CES. Since then, independent stations across the country have begun the process of upgrading their broadcast technology to take advantage of the two-way interactive capability that ATSC 3.0 opens. At this year's CES, ATSC 3.0 was officially branded "NextGen TV" and several manufacturers announced their plans to upgrade the internal TV tuners to be compliant in 2020 models. LG will offer six models; Samsung will feature NextGen TV in all its 2020 8K models; and Sony will ship on its X900H model. All in all, there are 20 devices on which NextGen TV is slated to be integrated and in-market during 2020. While this is a decent start, and eventually all new TVs will have NextGen TV tuners, the adoption rate of new televisions is the longest of any technology.

Although there will be interim NextGen TV adaptors due to the growing number of cord-cutters, it will likely be three to five years before there is real scale and true financial upside to local stations. It is possible that, like HDRadio, NextGen TV turns out to be a "too little, too late" technology. However, given the hastening transition to streaming, there is still a runway for NextGen TV to take off. Of all the technologies at CES, for our little universe of advertising and marketing, this is one to keep an eye on.

But Wait, That's Not All:

Stay tuned for Part 2, where we will explore how CPG brands are embracing tech; the robots have arrived, and, yes, I'll take a slice of mushroom with that; why privacy was integrated into almost every conversation; and I will share my personal wish list for the technology that I want to buy now. (Please look for the forthcoming GoFundMe page: Hey Alexa! GiveMinskyALamborghini. Just remember, folks: I do it all for you.)