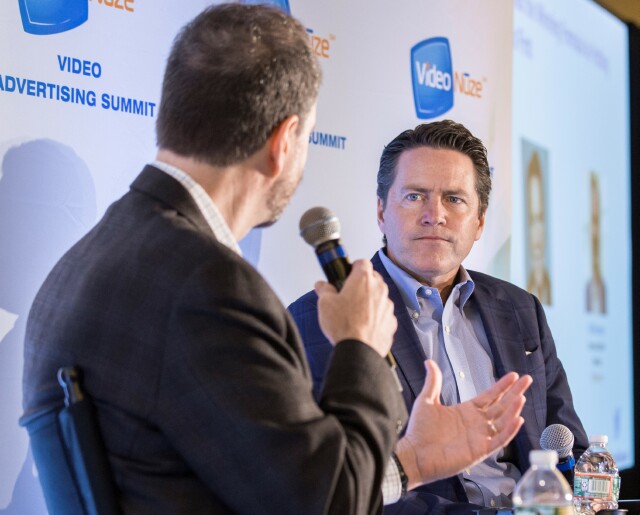 Hulu continues to keep up with the times.  When it first launched 11 years ago, it was 100% desktop delivered.  Now, according to Peter Naylor, Hulu’s Senior Vice President of Ad Sales, the company is 6% desktop, 80% living room and 100% subscriber driven.  “It’s all about choice and control,” he explained at the recent VideoNuze conference.  With three different types of subscription services -- depending on if a customer wants ad-free viewing or not, along with the multi-member access option -- Naylor (pictured above right) calculated that 82 million people watch Hulu per month -- with 70% opting for the ad-supported version of the service.

“Our subscribers come to us for content,” he explained, and they have ample choice with an inventory of 85,000 TV episodes.  Disney recently announced that they are planning to completely acquire Hulu.   According to Naylor, this offers a great opportunity for the streaming service.  “Control by one owner enables us to move faster and invest more in content,” he said.  “Our international expansion will accelerate.  So, we will keep doing what we are doing.  We have the wind in our sails.”

In striving for consistent experiences for viewers, Naylor has had to address the issue of inconsistencies in ad pod lengths.  “There was a time when different shows had different ad pod lengths,” he explained.  “But now all pods are capped at 90 seconds or less with a countdown clock.  And we don’t put ads where you don’t expect them to be.  We try to be thoughtful and also add as much value as possible.

Further, “100% of our advertising is addressable and we only charge for ads that are completed.”

Naylor and his team are data-focused and also pay great attention to social media to discern what consumers find valuable and objectionable in their viewing experiences.  “You can’t jam more ads in because you need to make a number,” he warned, because viewers have a lot more content choices.

“The more time people view on demand, the more likely they are to have two to three services and the more time they spend online,” Naylor noted.  “We are trying to figure out non-intrusive ad models.”  With multiple subscriptions, Hulu has to be very careful about ad overload and irrelevancy.  To that end, it has created pause ads, which place a static contextual ad on the screen when a viewer presses the pause button.  They are also rolling out a binge-watching ad product in the fourth quarter for those who watch three or more episodes in a row.  “We will identify ‘bingers’ and feed them contextual ads, such as ‘Feed Yourself,’” he said.  “We make the third episode commercial-free if you watch this 90-second ad. We want to reinvent the ad model.”

For Naylor, there exists a full spectrum of ad acceptance.  “It doesn’t have much to do with age, income or geography,” he said.  “It has to do with culture and interests. We strive to make ads more relevant.  When you use data properly, relevance skyrockets.

“There will always be ad avoiders,” he added, “but they are a minority.”

When asked how much an ad’s creative factors into Hulu’s decision about where and how to place it, Naylor replied, “Ensuring creative is relevant to the person watching is fundamental to a viewer-first advertising experience.  A relevant creative means a better experience for the viewer and better results for the advertiser.”

Naylor’s view of the future is focused on a world of connectedness and expansion, courtesy of technological innovations.  “I can’t imagine a scenario where every television household in America isn’t someday connected to an IP address,” he said.  “While I don’t know what percentage of TV advertising is going to become addressable in the next two years or how long it will take us to get to a fully addressable future, I know the market is undeniably going in one direction with the help of market forces like 5G, ATSC 3.0 and the rise of on-demand, OTT viewing.”

Of course, Naylor sees Hulu remaining dominant in the media firmament.  “Today, Hulu is the largest fully addressable marketplace in OTT, offering brands the opportunity to target and reach valuable audiences that are no longer found in broadcast television or via MVPDs,” he asserted.  “We’re offering the best of both television and digital, and brands are coming to realize that OTT should be their first stop for TV in their marketing mix.”