Joseph Jaffe on Fixing Corporations That Are Built to Suck 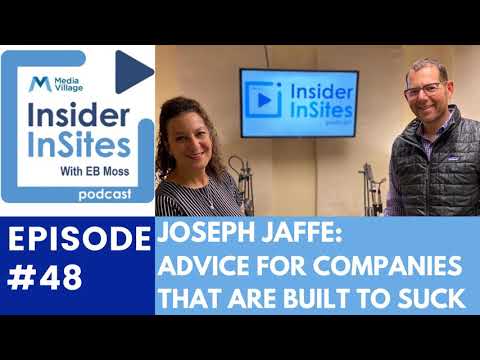 I love the backstory of why Joseph Jaffe named his strategic consultancy the HMS Beagle. That's the name of the ship Charles Darwin traveled on 200 years ago, during which he formulated his theory on evolution — that it's not the strongest of species that survives, nor the most intelligent, but the one most adaptable to change. And that is fitting to the premise of Jaffe's new book, Built to Suck:to evolve... or die. In this case, it's the life and death of the corporation at stake, which is much of what we discussed in a free-flowing episode of the Insider InSites podcast.

Not coincidentally, Jaffe's previous consultancy was named Evol8tion and had the goal of leveraging an automated platform and innovating around "better, cheaper, faster." The former director of interactive media at TBWA\Chiat\Day and OMD USA is now the author of five books and a frequent press source on marketing.

In our conversation, Jaffe explains the full title of his latest work — with its subhead of The Inevitable Demise of The Corporation and How to Save It? — includes a question mark, saying, "I'm not sure the corporation can be saved. There's enough in this book to talk about how to save the corporation, but I'm neutral here."

Jaffe also describes the four reasons for what he calls the corporate apocalypse: company size, age, culture, and being a public company. The following is a topline, edited for length and clarity. You'll want to listen to the full podcast to hear his specifics on all four issues and the suggested pillars for growth. Hear what he believes is the biggest fundamental, recent change in all of marketing, the Jaffe version of the "three Ps" for today's evolving environment, and why he has no tolerance for those "discovering" instead of re-discovering their brand purpose.

Moss: I appreciate you being here on Insider InSites.

Jaffe: Well, in 2005, I was, I think, one of the first marketing podcasts. It's amazing watching this incredible resurgence of podcasting. It's such a powerful medium; strategically, if we think about how much time we spend commuting, gardening, running, etcetera — when we're a captive audience with these headphones in our ears — it's not a fluke that we're finally seeing podcasting getting its due.

Moss: Speaking of how content consumption boundaries are gone — being able to watch Netflix here orA+Ethere — is a nice transition to Built to Suck. It's all about transitions and ways we need to embrace a new kind of world.

Jaffe: Bill Duggan asked me in a recent MediaVillage interview about one of the growth pillars described in the book, which is digital disruption. But I had said in my keynote at the ANA [Masters of Marketing Conference] that maybe it's more about disrupting digital because digital has become so boring and predictable and just uninspiring.

Imagine if we went back in time, and I was telling you about this amazing new thing called e-commerce, where at three o'clock in the morning on a Sunday you could be ordering stuff online.... Or about the even more wondrous thing that lets you search for stuff that you wanted based on when you wanted it. I still believe that the most fundamental change in all of marketing in terms of actually reversing the entire direction of messaging, of transactions, and being truly customer-centric, is search. If at that time, someone was presenting this to us, we wouldn't have reacted with wonder. We wouldn't have said, "I'm quitting my day job. I'm all in." We would have resisted it. We would have told everyone what our concerns were.

I always say, it's easy to get to "no"; the challenge as marketing professionals is to find a way to get to and fight for that "yes." We're surrounded by change, but do you recognize it when you see it and are you prepared to do something about it? That's what separates the winners today from the losers.

When you think about corporations, recognizing that their entire business model — the fundamental revenue streams — are being disintermediated and disrupted, are they deaf to these signs? So, go back in time, to almost project yourself forward, and say, "I made the mistake before, but I won't make it again." 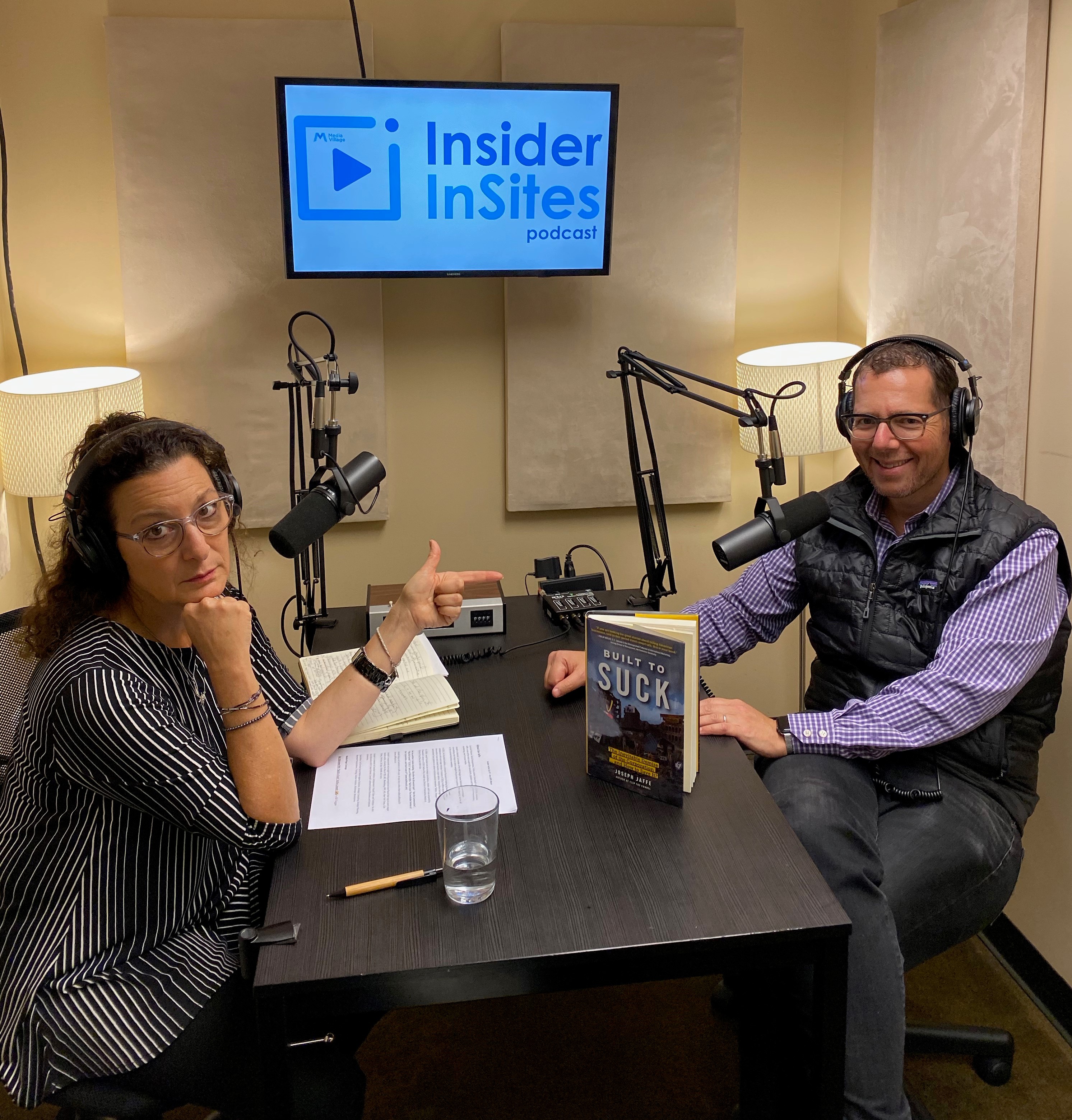 Moss: So, there's resistance to change and not embracing the wonder of new things, then pivoting. But how do you back up the claim that corporations are on their way out?

Jaffe: I call my books giant opinion pieces, not research papers. While this book has a lot of anecdotal evidence — Blockbuster, Kodak, Toys "R" Us, Sears, and, most recently, Barneys, Payless, and Thomas Cook — there's also a lot of empirical evidence. For example, there are now less than 50 companies of the original Fortune 500, which was started in 1955, still on the list....

There are four reasons for the corporate apocalypse. The first is size; the fundamental business model of big business is broken. Everything that was a growth enabler is now a growth inhibitor: size scale, economies of scale, efficiencies of scale, cost-cutting, global networks, global reach. What has really happened is that the corporation has slowed down when the world is speeding up, has become too big, too siloed, too political, too dysfunctional, too conservative — and the corporation has lost its competitive edge.

Second is age: being too stubborn, set in their ways. Third is being a public company. How can we think and act long term and see the bigger picture when we are constantly being weighed down and anchored by these short-term quarterly returns?

The fourth reason is culture and, ironically, that's the one that can actually be defeated first, but only if the company can get back to day one and not discover its purpose butre-discover its purpose. This whole discovery effort — paying the McKinseys and Deloittes millions of dollars for a year and a half of time that we don't have.... Don't discover it; just you forgot it. Go back to that scrappy entrepreneurial spirit when your company, when your large behemoth of today, was literally operating out of a garage.

Moss: Those reasons actually parallel paths what MediaVillage keeps reiterating about the media industry: We have ageism in terms of media-buying demographics and the talent pool, corporate cultures that demand more diversity and inclusion. And on the financial side, look at what's happened with procurement and the agency community.

Jaffe: I agree, and ... this may sound like a controversial statement, I would say the demise of prime time is probably the best thing that's ever happened to advertising: I call it time or lag analysis. It's the amount of time that elapses between exposure to a message and the ability to convert on that message. So, again, I'd be there watching ER or Seinfeld on Thursday night and see this commercial for a car. But the car dealership is closed at night. What can I do about it at the time? So, I do what every human being does: I forget. Which is one of the reasons we need all frequency — to keep reminding people. But we're reminding them at the worst possible times: when they actually can't do a damn thing about it.

Ultimately, we need to be serving the right person with the right message in the right place at the right time. And that's why I think we are seeing, to a degree, a resurgence of out-of-home and radio.

Moss: Two plugs here: the first, the relatively new organization DUZY tv has a patent on an overlay that lets you buy that product then and there without leaving the video. And second, MediaVillage's Jack Myers also talks about how advertising is getting more efficient, so we don't have to oversaturate if we are targeting and using addressability more. But that requires starting from zero to budget for just the solutions that deliver that right message. So, it's got to start with: What does your marketing require? And, how [do] you get out there at the right time?

Jaffe: I completely agree with that. The acquisition funnel is going to shrink, and the retention funnel is going to grow, and we will spend less money acquiring new customers because we're more efficient at doing so. That's the pursuit of zero waste. That is the future for media and for marketing, but it's not one that lazy and entitled and resistant-to-change executives are going to like at all. The path I lay out in Built to Suck starts off with "embrace your heresy" — embrace your deepest, darkest fears. What if you charge your customers for admission like Costco does? What if you killed the cash cow like Netflix did when they shipped their billionth DVD, then almost immediately shut it down. Or, REI closing on black Friday. You've got to be able to accept and embrace your mortality and then say, "Well, if our time is limited, let's live. Let's maximize this gift, this opportunity of life."

And the four growth pillars? They are digital disruption, talent resurrection, customer obsession, and corporate citizenship. I do believe that if a company goes down this path, they absolutely will maximize their chances of surviving and even thriving — from survival to thrival.