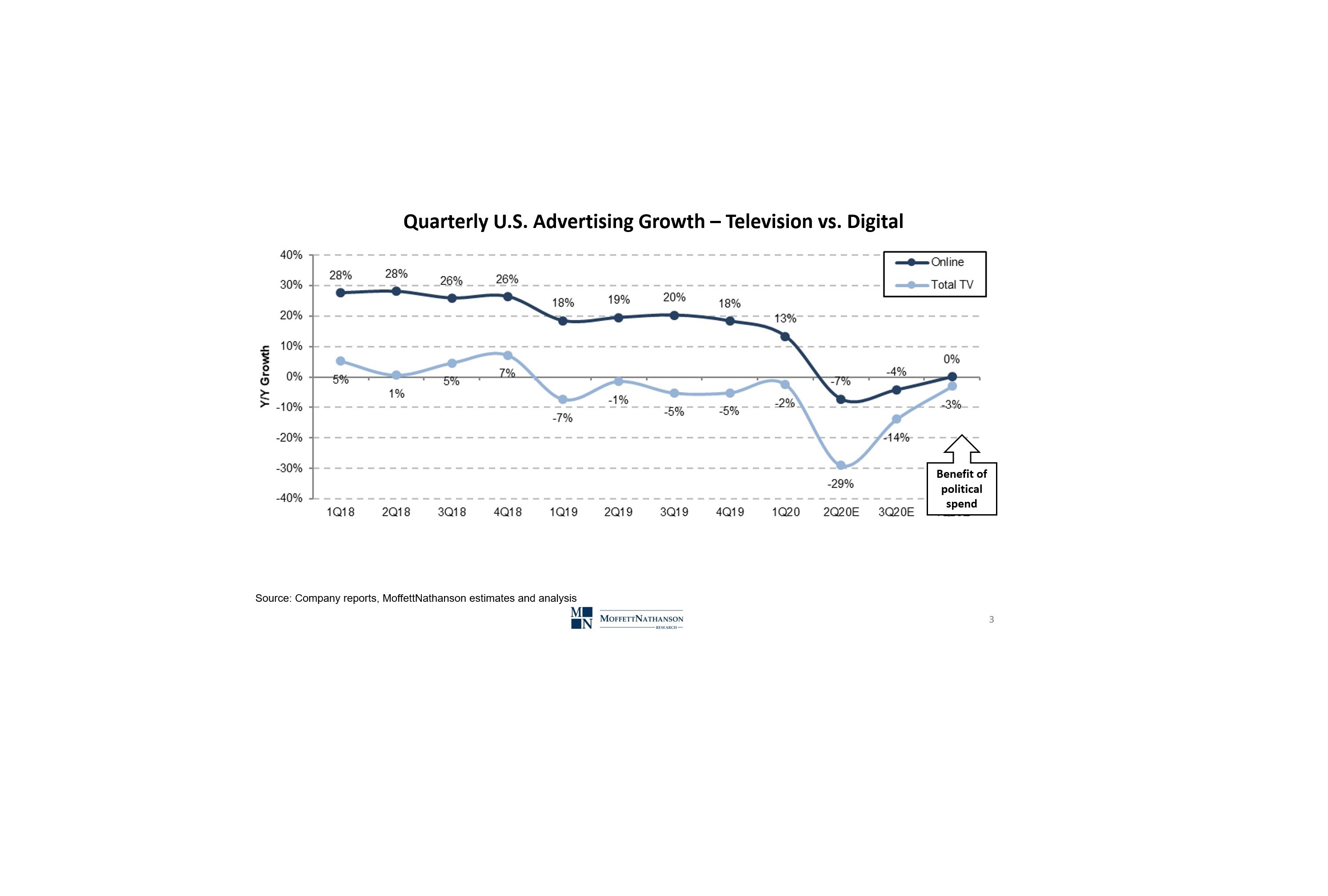 Surprised by the resilience of the advertising economy, but worried about its future, two of the ad industry's leading forecasters, Jack Myers of MediaVillage and Michael Nathanson of MoffettNathanson, regrouped in a Jack Myers Leadership Conference on July 16. The two had discussed their initial forecast given the impact of COVID-19 on April 15th in a well-attended webinar. (View the full video Leadership Conversation on-demand here.)  To read Charlene Weisler's commentary on Jack Myers' update and forecast, link here.

In a candid discussion, both admitted that there are so many unknown forces playing with the marketplace that their numbers may be malleable. While there are significant differences in their approaches, in the rear-view mirror, both acknowledged the ad industry has weathered the pandemic better than their anticipated scenarios.

"Things were better for digital," commented Nathanson. "The big digital names reported stronger performance than we expected. There were worries about potential weakness from the small and medium enterprises in social, but that didn't amount to much." One of the factors that negated the worst case scenario was the strength of DTC brands whose life-blood is direct response advertising. Says Nathanson, "The stay at home moment gave new brands like Peloton and Wayfair the ability to breakthrough and play on TV." With Upfront advertisers looking to get out of commitments and networks wanting to show some flexibility, it gave these DTC players the opportunity to advertise on inventory not usually available to them. "I underestimated the amount of money chasing the stay at home customer. It brought money into the market that I didn't expect."

Nathanson's forecasts show that, at its low point, digital growth declined by 7% while television experienced a 29% decline. TV regained some of its momentum in June with Nathanson crediting the government stimulus and low interest rates for the rebound. 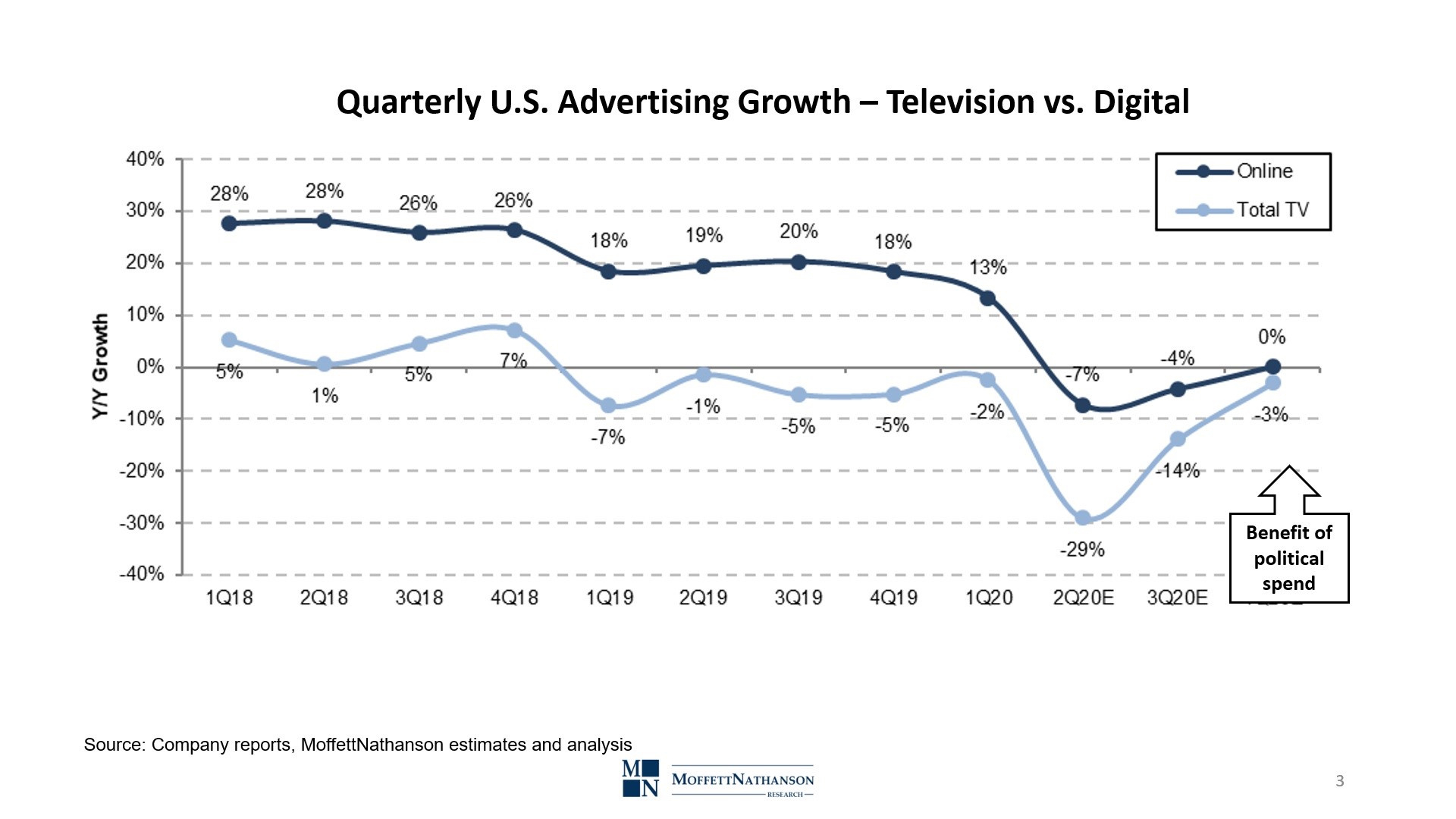 Myers and Nathanson both pointed to the patterns in past downturns and previous pandemics, which provide indicators that recovery is going to take much longer than anticipated, and to a very large extent, is dependent on the creation of a vaccine.

Nathanson's current forecasts are more optimistic than Myers', but that is attributable to the consensus assumptions in the current model; assumptions that Nathanson is now second-guessing. "Our forecasts are based on a model where we still have a "return to normal" by Q4," which he admits, is looking less and less likely. "I think we are back to a duration which is really concerning about the improvement from here. This (COVID-19 based disruption) could last through the first half of 2021."

A large part of getting back to normal includes a resumption of new and original Broadcast and Cable TV programming for the Fall and, most importantly, a return of sports programming, Nathanson believes that MLB, NFL and top 5 NCAA conferences will start, but whether they finish the season is up in the air. While the Ivy League has already cancelled all sports for the Fall Semester, for top colleges, the money may prove too tempting, "They really need football revenues in the door. I am concerned that the "Power Five" won't see the football season finish. They'll start, but I wonder how college finishes as it does put students at risk."

While Nathanson is 70%/30% that sports will happen, Myers is the opposite based on the bigger challenges of many schools anticipating second waves and changing the school calendar which could adversely affect team practices; in addition to the challenge of travel to states with outbreaks.

Turning to the Wall Street performance of media companies, Nathanson's analysis indicates that the companies with the stronger DTC offerings have recovered relatively well. ViacomCBS leads the pack, which is counter to Nathanson's expectations. "I would not have predicted ViacomCBS being the best stock or sharp rise, and I would have predicted more underperformance from traditional players. ViacomCBS was oversold. They did a good job of taking out a lot of costs ahead of this quarter. They have Pluto TV and they've been telling more Over the Top stories." Nathanson is amazed at the growth in this situation of Netflix, Apple, and Amazon. "You just pull up a chart on Apple, Amazon, and Netflix and it's growth, growth, growth. It's shocking to see their market cap." 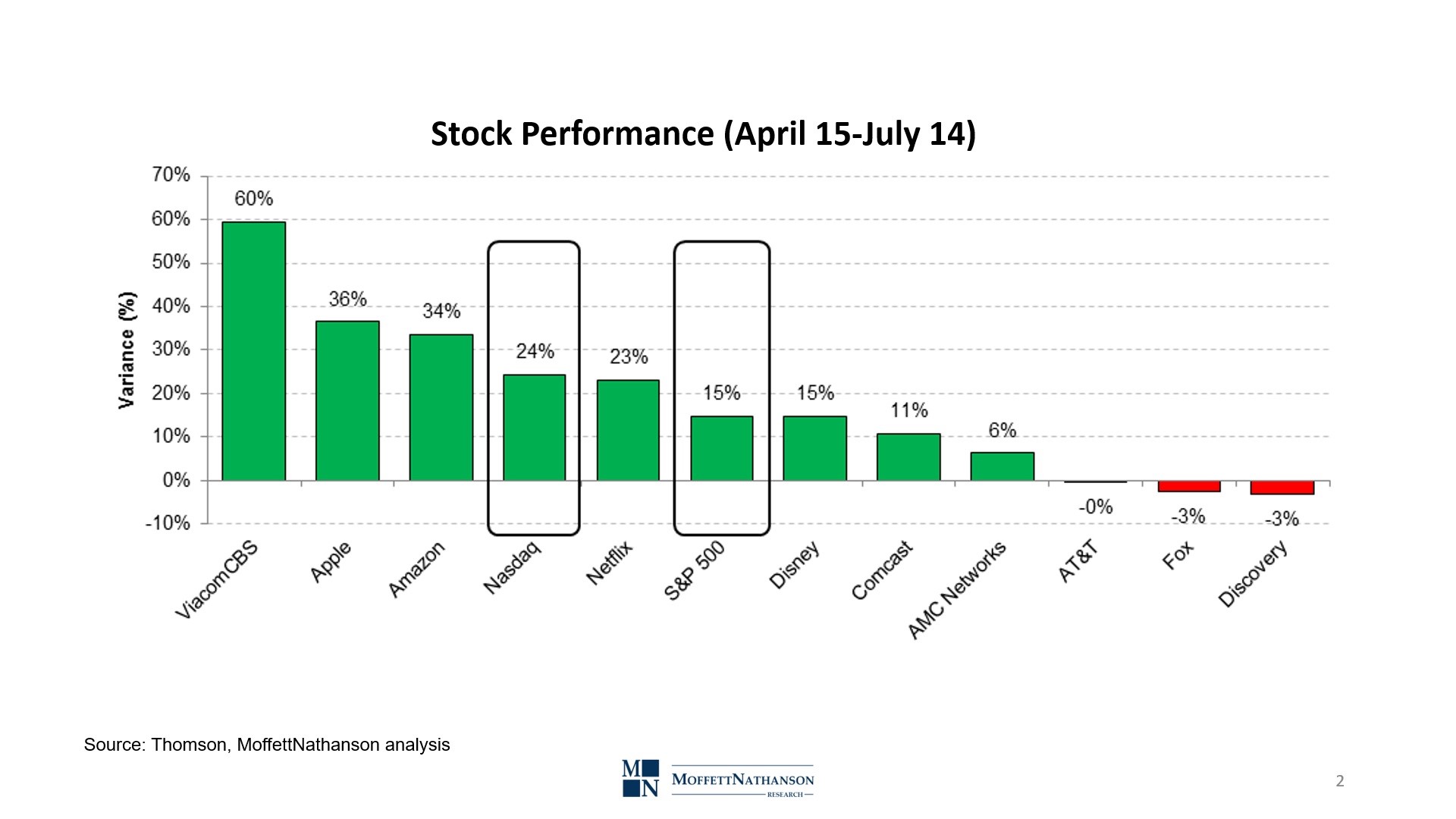 Nathanson predicts that cord cutting will significantly accelerate. On one hand you have the economic toll of COVID-19.  On the other, major league sports contracts are beginning to be renegotiated including the NFL, whose current contract ends in 2022, and the NH, which ends with the 2020-2021 season. The anticipated inflation to carry these events will be passed on to the consumer by their MVPDs, in turn, incentivizing more non-sports fans to cord cut. MoffettNathanson is predicting an increase in cord-cutting from 2% the same quarter a year ago to 7% this year.