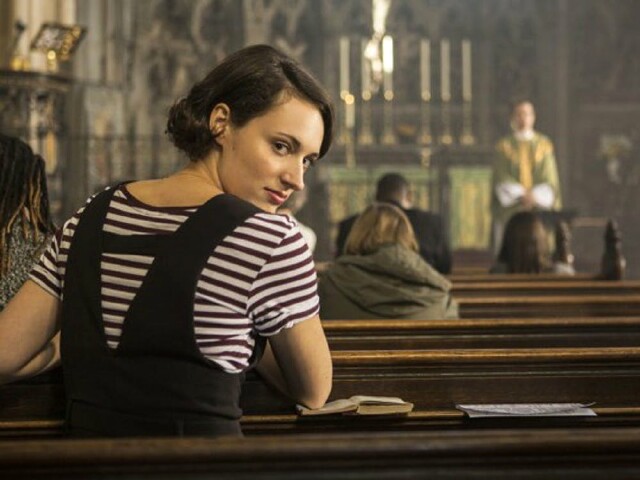 My five-part series revealing the Top 25 Programs of 2019 continues below.  Be sure to read part one, part two and part three, as well. 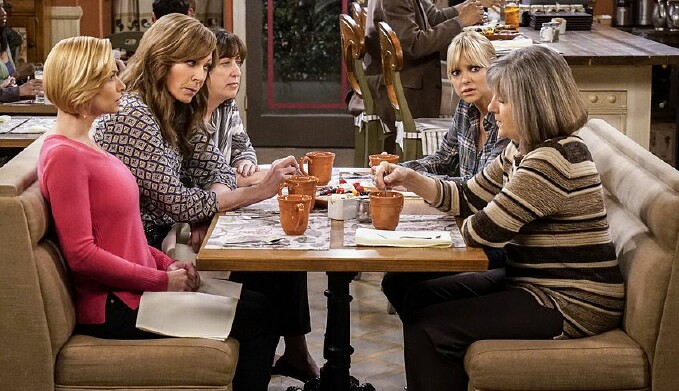 Jaime Pressly, Allison Janney, Beth Hall, Anna Faris and Mimi Kennedy are pictured above, left to right.  Throw in William Fichtner and Kristen Johnston and you've got the most reliably funny ensemble working on any television comedy today.  Seriously.  Every one of these performers is provided with laugh-out-loud dialogue in every episode, as are guest stars and recurring players from this long-running show's ever-expanding canvas.  Since it premiered in September, 2013, Mom has been one of the best sitcoms on broadcast or any other medium; but this year, with The Big Bang Theory having come to an end, it now holds the distinction of being the absolute funniest.  And it still finds fresh ways to explore many very serious issues amid the non-stop laughs in a way I haven't seen handled so successfully since All in the Family.   Whenever Mom ends, and I hope that isn't anytime soon, it will belong in the pantheon of CBS sitcoms that includes such classics as I Love Lucy, The Dick Van Dyke Show, All in the Family, The Mary Tyler Moore Show, M*A*S*H, The Bob Newhart Show, Maude, Murphy Brown, Designing Women and The Big Bang Theory. 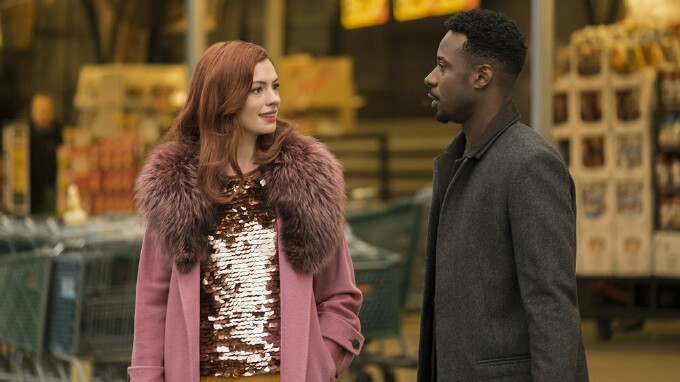 Remember when the New York City-based movies of Woody Allen used to delight the masses and make Manhattan look like the most desirable and romantic place on earth?  Modern Love, an anthology from Amazon that told several seemingly unrelated stories about relationships and romance in the Big Apple came as close as anything to evoking Allen at his peak.  Indeed, were he still at that peak this is the show Allen might have made when he entered into an ultimately unfortunate relationship with Amazon a couple of years back.  I fell deeply in like with the story of Dev Patel’s Joshua, inventor of a hugely influential dating app, and Catherine Keener’s Julie, a journalist who writes a profile of him for The New York Times Magazine.  (The series is itself based on a long-running weekly relationship column that appears in The New York Times.)  Although their relationship is platonic, the impact they have on each other’s lives is just beautiful.  But the standout here is the sad tale of Lexi, a bi-polar young woman trying to build a career and a love life while contending with her disorder, which overwhelms her at the worst times.  Anne Hathaway (above left) has been outstanding in many movie roles, and she has an Academy Award (for Les Miserables) to prove it.  But I believe her performance as Lexi may be a career best, as it transcends everything, including the story itself. 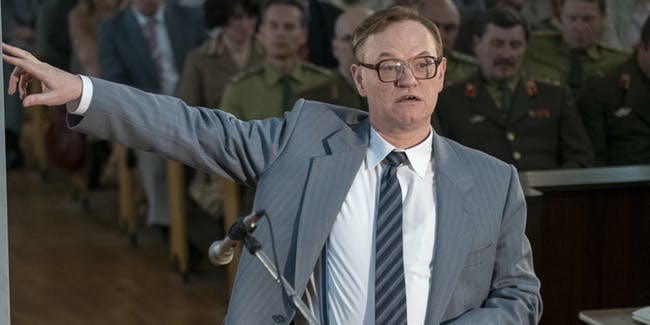 No other Emmy Award win surprised and delighted me more than this incredibly ambitious project being honored as Outstanding Limited Series.  Another of HBO’s quiet launches on its “new” Monday night, this five-part, nerve-frying, true-life drama about one of the great (and since largely forgotten) cataclysms of modern times seemed to come out of nowhere.  The audience found it, though, and after the first few minutes I’m sure nobody turned away.  (This one was built to binge.)  Jared Harris (above), Emily Watson and Stellan Skarsgard were superb as the voices of reason risking the wrath of the Russian government while struggling to be heard as they attempted to make known the details of what went wrong on April 26, 1986 at the Chernobyl nuclear power plant near the city of Pripyat.  It remains the worst nuclear energy disaster in history.  Chernobyl was as bold and unafraid of inciting international conflict as the players in this nightmare narrative.  Educational and entertaining, it prompted as many questions as it answered.  Exactly how many people died, and how much damage was done?  Can this happen again?  What dangers are we all in right now of which we are unaware?  Is the region around Chernobyl as safe today as “they” say it is?  No wonder we can’t sleep. 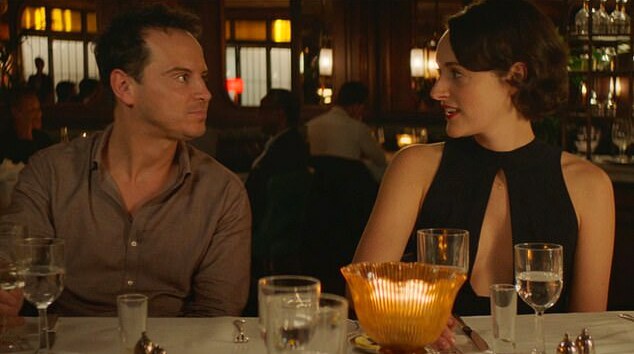 It’s amazing what a hot priest will do.  To be honest, I wasn’t nearly as impressed with Season 1 of this Amazon dramedy, which was so unrelentingly depressing I could barely breathe, let alone laugh.  Then along came Andrew Scott (above left) in one of the most pleasing performances of the year, bringing much needed humor to the show as a cursing man of the cloth with a taste for gin and the ability to laugh at life’s most upsetting situations, making him the perfect friend (and more) for the title character and her fractured family.  (Indeed, the Hot Priest had been the most talked about television character of the year until Baby Yoda appeared on the scene.)  With Scott in the mix, and a vivid new character with whom to interact, the performances of the cast, which were already quite good, became collectively and individually superb – especially Sian Clifford as Fleabag’s sister and Woman of the Year Olivia Colman as their lusty and caustic godmother.  It’s all very complicated, but this talented ensemble and its crew made it all seem so easy.  There is no denying that Fleabag’s sophomore (and apparently final) season made a major impact in Hollywood and with the hive-mind.  After all, the show, and its creator and star Phoebe Waller-Bridge (at top and above), were honored with every major award for which they were nominated this year (most notably with three TCA Awards and four Emmys).  And there are undoubtedly more accolades to come as awards season gets underway.  Will this outpouring of love convince Waller-Bridge to set about putting together a third season?  She could do much worse! 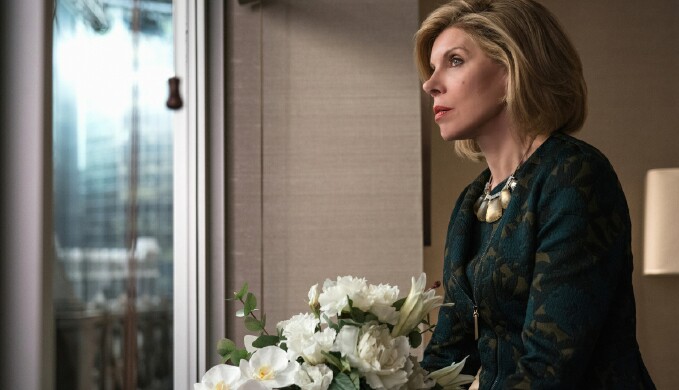 I said it best in my review of this towering achievement, so I’ll paraphrase from that rather than try to top myself.  In its third season The Good Fight played many new notes, and many that were very familiar, without ever striking one that felt false.  To their credit series creators Robert and Michelle King never underestimated the intelligence or awareness of their audience.  As masterful writers they weren’t afraid to challenge even those of us who most appreciate their work.  They certainly did that in Fight’s third season, which explored racism and sexual politics, largely in the workplace but representing so much more … along with the imminent catastrophes of climate change, the dangers of renegade liberalism unchecked, the perils of political correctness run amok, the strengths and weaknesses of the judicial system and, throughout, what it means to be a halfway decent person trying to cope with the weekly atrocities that have defined the Trump presidency.  That’s another thing about The Good Fight – even in its third year, it refused to pull back from its full-throttle response to everything Donald Trump has done since taking office.  It is one of the boldest, most uncompromising dramas about contemporary America that I have ever seen.  Certainly, there have been many over the decades -- but I cannot recall one that tackled so many urgent topics in so thorough a manner, using well-established characters the audience has been conditioned to care about to examine the good, the bad and the ugly of modern life.  Fans may never look at any of them the same way again.

Next up:  The top five, including Program of the Year