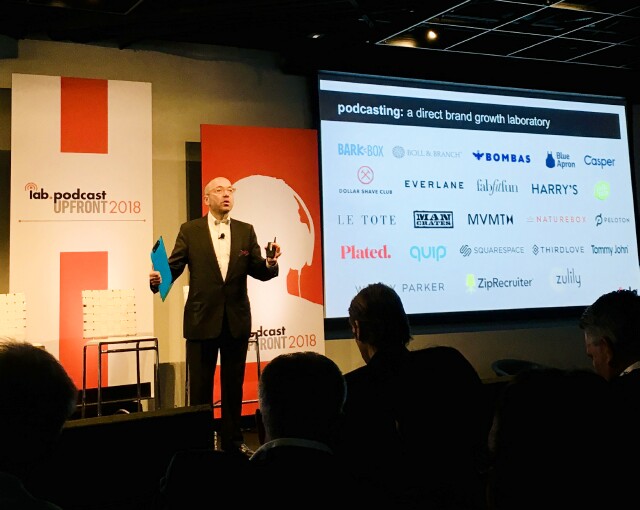 It may seem like podcasts have been around for a long time, said IAB Chief Executive Officer Randall Rothenberg, kicking off last week's sold-out Podcast Upfront conference in New York City, but it's been less than ten years.  It feels longer "because very few entertainment and information and news media have ever established themselves this quickly in the consciousness of culture," he explained.  Rothenberg (pictured at top) went on to reference The Cluetrain Manifesto, which twenty years ago observed how the world wide web would change us:  "A powerful global conversation has begun. Through the Internet, people are discovering and inventing new ways to share relevant knowledge with blinding speed."  Rothenberg's mini economics lesson was on the connection between the economy and digital; that what's happening in the marketplace is impacting podcasting.  Given that consumers now have direct access to brands -- versus having always been dependent on a middleman or retail -- brands need direct conversations with consumers.  Podcasting provides those direct conversations.

Describing podcasting as a "direct brand growth laboratory," Rothenberg stressed that "story matters because it is the best and most powerful way for brands to differentiate themselves in crowded, commoditized marketplaces."  He illustrated his point with a PowerPoint logo parade slide representing the success stories of Dollar Shave Club, Quip and Casper to Peloton, Blue Apron, Squarespace and more.

Podcast hosts -- the ones telling those stories and having those "conversations" -- must, as a result, not only be expert storytellers to help build those brands paying their production bills, but to be able to draw in listeners and build their own audiences.  This tee'd up the presentations by a baker's dozen of media companies, each aiming to differentiate themselves to prospective buyers in the room.  Read more about the plethora of content and interesting collaborations in Part 1 of this report.

And what of growing the medium itself?  How to deliver the holy grail of scale -- which is what many brands beyond direct response are demanding?  While podcasting is still resolving the frequent dilemmas of digital, such as data and measurement standards, moves are being made to boost the very medium itself; in part with concerted education efforts and in part by leveraging the power of other brands.

While virtually all studies show awareness of podcasting itself is up among mainstream Americans, regular monthly listeners are still hovering just under one third of the U.S. adult population.  That means there are still many millions of potential listeners out there, noted Westwood One President Suzanne Grimes, so she promised "the largest marketing campaign yet to educate America on how to discover and download and listen to a podcast."  Given their built-in promotional platform [with 400 radio stations], she added, "We can get that word out to a quarter of a billion people in a given week." 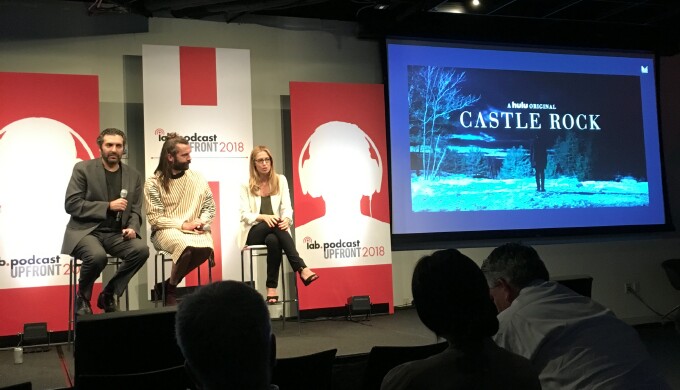 Another boost will come from turning up the partnership volume.  Some compelling alliances were revealed in content creation efforts, many the result of reaching across the aisle to collaborate, leveraging the scale and name awareness and reach of other media or brands, and in one case an almost curious marriage of competitors.  Westwood One is working closely with American Public Media (APM) for sales and promotion of the Peabody-winning investigative podcast In the Dark.  Midroll partnered with Marvel to launch its first-ever scripted podcast, Wolverine: The Long Night. Wondery paired with The Ellen Show for the sizzle and the renown Spotlight Team from The Boston Globe for a six-part series on the saga of fallen NFL star, Aaron Hernandez, for the serious. They'll also produce The City with USA Today, which will take an in-depth look at crime in Chicago.

Most intriguing in the collaboration realm was the "sum of the parts" effort by iHeart Radio and How Stuff Works (HSW) and content company TenderFoot TV.  Counting on true-crime to continue trending, the radio network is relying on the pedigreed creative of HSW for Season 2 of the hit podcast Monster, this time telling the tale of the Zodiac Killer.  iHeart will be the primary distribution and sales point, promoting the January 2019 launch on radio with on-air personalities like Elvis Duran, added multiplatform video layers from TenderFoot and cross-promotion by HSW.

While they build the base, podcasters must keep innovating around ad products, too.  Promising tools were presented by Panoply, with a focus on audience-based vs. program-specific based buying, thanks to a partnership with Nielsen, while Wondery has innovated around re-targeting with their new Bullseye product that will allow a marriage of display with host-read offers.

But as Rothenberg noted, it's the story telling that is and has to be a central and essential part of podcast marketing.