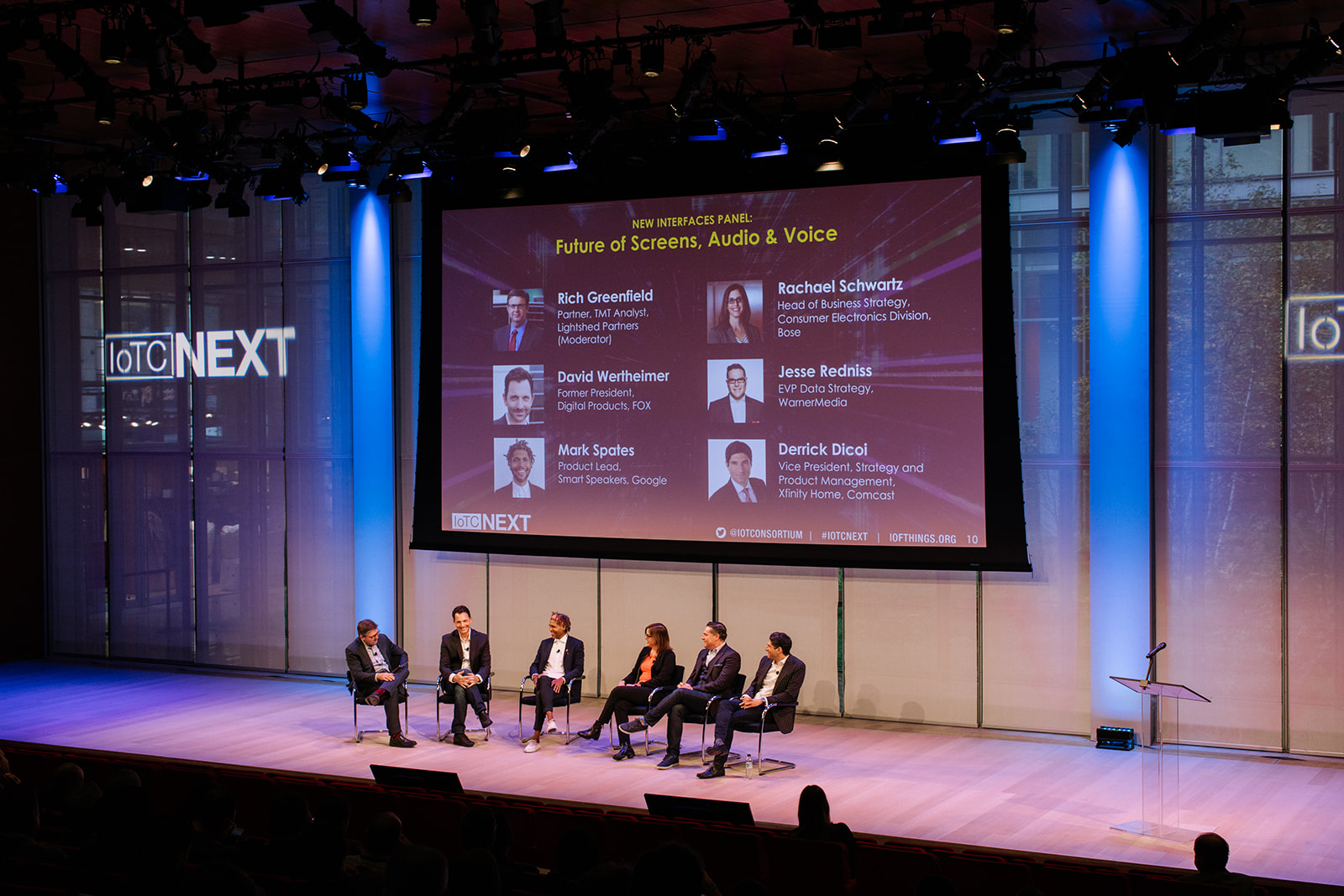 Now that the majority of households in the U.S. own, watch and use a smart television set or TV-connected device — with artificial intelligence-powered ability to control how they watch or use these products with their voice — what’s the next big thing consumers will do with these products?  The answer:  Monitor and control other aspects of their homes, from adjusting room temperatures to knowing who is at their front door.  That was the consensus viewpoint of a new interfaces panel at last Tuesday’s first-ever “Next: The Connected Future Summit,” hosted by the Internet of Things Consortium, a collection of companies and ventures in the smart-home marketplace.

The smart TV represents “prime real estate” as a hub for all sorts of smart home applications, along with connected cars, smartphones and tablets, noted Derrick Dicoi, vice president of strategy and product management of Comcast's Xfinity Home.  “It’s all about coming up with apps that bring people together,” he said.

Redniss promised that overcoming that obstacle will be a priority of WarnerMedia’s Innovation Lab — now under construction in New York’s Chelsea district and scheduled to open early 2020.  “The touchpoint of these new consumer experiences is on these devices,” he explained.  “How do we piece together different experiences on a 24-hour cycle?  We have to all agree to have that fluid consumer experience.  Otherwise, we’ll all operate in silos.”

Many smart TV set and device models already give users the ability to control other elements of their homes with their voices.  Amazon Fire TV products incorporating Alexa can, with a voice command, change the color and intensity of a light bulb in seconds.  That ability was demonstrated earlier this summer during a public presentation at Dolby’s Soho workspace.  Since that event, Amazon and Discovery have launched Food Network Kitchen, a multipurpose interactive TV service through which subscribers can order cooking ingredients, food and kitchen utensils for home delivery.

“We have a lot of opportunity in front of us,” explained David Wertheimer, former president of Fox's digital products division.  Since leaving Fox, Wertheimer has become an investor in several technology start-ups in the Internet of Things space.

That opportunity comes with obstacles.  Interoperability among hubs is one of several challenges the smart TV set/device providers must address to move forward.  Another is pioneering new applications that catch on with consumers, as well as bringing apps that consumers develop on their own to national availability.

Facebook’s anticipated launch of Portal TV, a connected device for video chat, could be the trigger for a host of other video-centric applications delivered through smart TVs, such as photo sharing and multiplayer games.  “It’s a compelling case for people to see their friends in big color on a screen,” noted Rachael Schwartz, Bose’s consumer electronics head of business strategy.

“Photos could be a very big service for TV,” said Mark Spates, Google’s product lead for smart speakers (Google Assistant).  “It has so much emotional charge.  You just have to make a good use case [with consumers].”

Redniss seconds the belief that smart TV sets and devices could become a prime tool for the next level of video communications.  “You’ll definitely see services like this coming up,” he said, ticking off unique gaming interfaces and calendar screens adjusted any time as likely apps.  “You can have a video storytelling service where grandma, live-action or animated, [speaks] to kids.”

Along the way, look for a lot of innovation during 2020, with both artificial intelligence–generated voice and visual features, resulting in apps converging the two AI levels.  “It’s under the radar,” Redniss added.

“TV is a social medium, and we’re thinking about that again [with these developments],” Dicoi remarked.  “The consumer will be the ultimate winner.”

(Note: Greg Kahn, president and chief executive officer of the Internet of Things Consortium, was a guest earlier this month on Tomorrow Will Be Televised, Simon Applebaum’s Internet-distributed radio program and podcast.  That episode is available here, and on iTunes, Apple TV and iHeart Radio’s podcast network.)