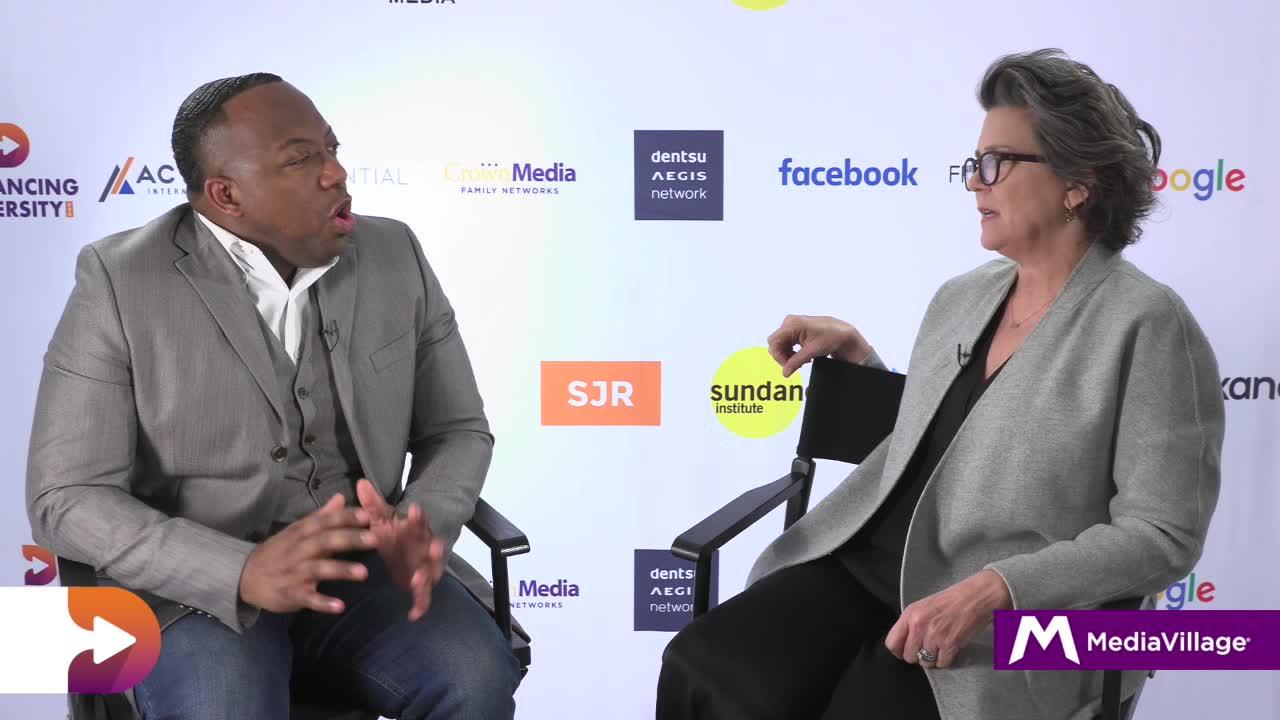 Madonna Badger, Chief Creative Officer and Founder, Badger & Winters, joined DK Bartley, Senior Vice President, Head of Diversity and Inclusion of Dentsu Aegis Network to discuss her leadership in bashing stereotypes in advertising, her induction into the 2019 Advancing Diversity Hall of Honors and her on-the-spot hires of two candidates at the event's Inclusive Talent Job Fair.

Held January 9 at Aria Resort and Casino during the Consumer Electronics Show in Las Vegas, the Advancing Diversity Honors recognized Badger for her #WomenNotObjects campaign, among other work, such as having changed the jury packet at Cannes to eliminate ads that included stereotypic portrayals of women and other marginalized communities.

In response to Bartley's inquiry about the initiative, Badger replied, "Many times, women have no narrative. They're treated as props. They're treated as plastic. Really not treated as human at all. And that that objectification of women really leads to an unequal viewpoint of women. And so, getting the jury laws changed at Cannes was the greatest achievement I can think of in that diversity moment for me." To hear more about how Badger wanted to inform other creative directors about her mission, click here.

Bartley agreed, "That's an amazing concept because that goes beyond diversity. There's so much education in that and not only in how we perceive ourselves, but how we interact as individuals." He continued, "Tell me a little bit about how far you think the industry, related to advertising and diversity, has come."

"In the last decade it has been a series of waking up," Badger said. "And it's also been, I think, a time where we all have to really look at ourselves. I think that understanding diversity…is really an inside job. Like we have to understand our own unconscious bias in order to change it. "

Bartley then quizzed Badger about her experience during the immersive Creative Tensions exercise during the event. "That experience really opened my eyes to how much… we consider ourselves as others, and that, strangely enough, we all consider ourselves as others. And just sort of the sadness in that, but also the power," Badger said. Click here to listen to Badger's take on the impact of understanding what our own individual superpowers are.

The news of Badger's having made two offers to candidates during the job fair came up. Bartley said, "I know that you also participated in the job fair. Because there was such a plethora of talent here at CES, what was that experience like for you?"

Badger replied, "I wasn't that interested, to be honest. And then all of a sudden, these two young women popped up, and they were introduced to me. And they had traveled from Atlanta. Like, got in the car, found a hotel rooms, were in some wild master's program and they were there to find a job. And I'm like, what? It got me -- just the hutzpah. You know, I loved it."

She continued, "They had gotten out of their comfort zone, and come to this job fair and come to CES looking for work, looking for a mentor...And one of them, her name was Doll, [Dollitia Thomas], happened to be PR major. And the other one happened to be a radio/sound major. Her name is Kiki, [Kiana Mincey] …And they are best friends. Like, literally could finish each other's sentences…And they were so fabulous. And I just love them. And so, I said, 'You got to come work for me. Like, forget about all this other media. You've got to be in advertising, and you got to be on the cutting edge.'"

Bartley asked, "You offered them a job on the spot?"

Badger replied, "On the spot. On the spot." Click here to learn more about Doll and Kiki and the job fair.