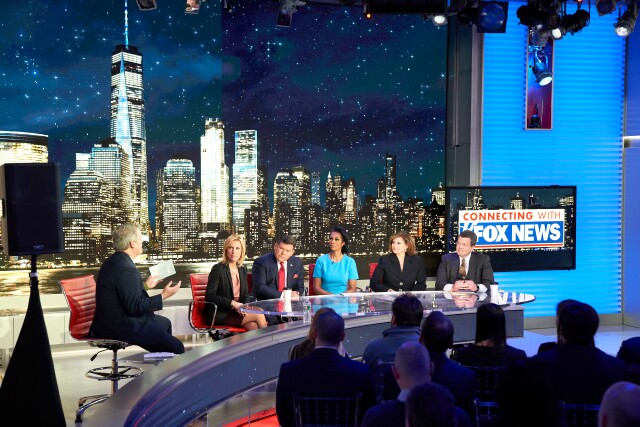 It is a later start than in past years and there are fewer services participating than ever before.  Nevertheless, the 2019 Upfront/NewFronts event season is now underway, and MediaVillage has revved up its popular annual feature:  In-depth reviews of individual Upfront/NewFront presentations, broken out by category, with each scored on a 0-to-5 Jacks scale.  This time around, with Nickelodeon pulling out of the leadoff spot the Viacom-owned network enjoyed the last few years, Fox News Channel and Fox Business Network pulled in Wednesday morning as the opening attractions.  This presentation was conducted one week before both networks were on track to transition from 21st Century-Fox ownership to “New Fox” infrastructure, emerging from the merger of 21st Century-Fox with the Walt Disney Company.

Venue:  Fox News and Fox Business headquarters inside the News Corp. building on Avenue of the Americas, across from Rockefeller Center.  A red-carpet entrance outside, highlighted by old-timey “Fox Square” street signs and a coffee stand, invited attendees to gather inside the studio space Fox News used for its 2016 and 2018 election night coverage.  As guests moved around to eat breakfast or mingle with on-camera talent from both channels, an overhead ticker flashed the names of ad agency and media buyer notables.

Presentation:  A two-part production, each one intended to put a comprehensive face on the program lineup of each channel and drive home the message that, together, these services represent “a pop culture phenomenon, the one that never gets talked about,” Fox News Chief Executive Officer Suzanne Scott declared.  “We are open and transparent, across every platform.”  In this case, phenomenon is defined by consistent ratings competitive with any TV network, not just news or information-centric services, added Marianne Gambelli, Fox News’ President of Advertising Sales.  “Our connection with viewers has never been stronger,” she asserted.  “Our viewers’ over-index spending for many product categories.”  She also addressed sponsor boycott campaigns by Media Matters and other advocacy groups in recent months, aimed at Fox News Channel’s primetime lineup of opinion hours.  “The voices of a few should not stop you from advertising on our brand,” she said.  “Our viewers watch [these programs] because they trust the hosts and trust the programming.”  (Pictured at top, left to right:  President and Executive Editor Jay Wallace, host Laura Ingraham, chief political anchor and anchor of Special Report Bret Baier, anchor Harris Faulkner, anchor Maria Bartiromo and anchor and managing editor of business news for FBN and FNC Neil Cavuto.)

From there, attendees moved to Studio J, the 12th floor home for daily/weekly FNC and FBN programs from America’s Newsroom to Hannity.  Bret Baier (Special Report), Harris Faulkner (Outnumbered and Outnumbered Overtime), Maria Bartiromo (Mornings with MariaandSunday Morning Futures), Neil Cavuto (various FNC/FBN programs) and Laura Ingraham (The Ingraham Angle) were among the anchorpeople and commentators who exchanged thoughts on the economy, the growing roster of 2020 Presidential election candidates and other hot topics. 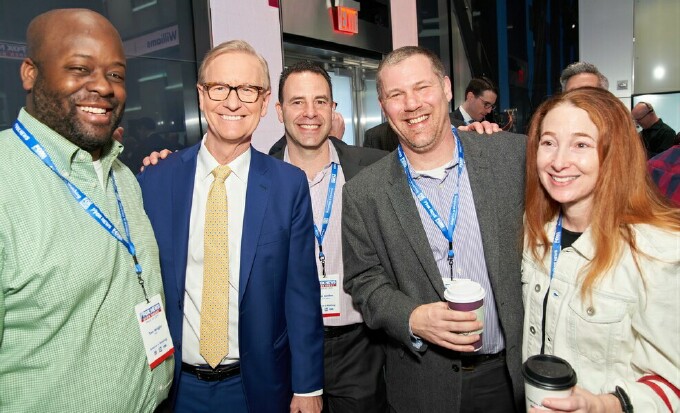 News:  A hint here or there during the roundtable section, with Bartiromo disclosing an FBN special in the works on artificial intelligence and its consequences for society.  Ingraham noted that at least two episodes of her nightly hour will originate this week from Texas, focusing on immigration and border security issues.  “Keep an eye on Beto O’Rourke [as a 2020 candidate],” she added -- a few hours before O’Rourke announced his plans to seek the Democratic nomination.

Star Time:  Plenty of FNC and FBN talent on hand for the breakfast portion, including Fox News at Night anchorperson Shannon Bream, FBN morning anchorperson Stuart Varney and nightly host Kennedy; and the full crew from Fox & Friends and The Five.

Innovative Opportunity:  Big surprise of the presentation -- no current or future initiatives showcased.

Cuisine:  Wide variety of breakfast treats on display, including a juice/cocktail bar, buffet table and appetizers served by waiters.  Best eats: “Breakfast Pigs in a Blanket,” namely sausage slices with a pancake wraparound, Nutella-filled small crepes and French toast on kabob sticks.  A rare serving of pomegranate juice at events like this was a plus.  Worst eat: extremely sticky maple syrup my jacket did not appreciate.

Next up:  Crown Media Family Networks, back one year after a snowstorm put its Rainbow Room showcase into a deep freeze.