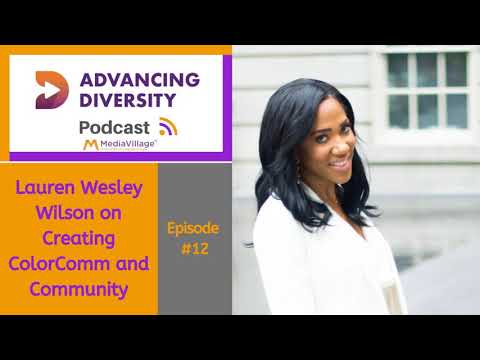 Almost 10 years ago, Lauren Wesley Wilson was aiming to climb the ad agency corporate ladder. But at meetings and among senior executives, she was deterred; she didn't see anyone who looked like her. There were no African American, Latinx, or Asian individuals in leadership roles. So, she began a series of luncheons in her city of Washington, D.C. "to bring together people of color in our industry because so many of us were working in the space, feeling isolated.... We didn't have a community to call on, as it relates to new business or getting promoted and advancing internally, or how to navigate corporate America. Many of us didn't even have friends who worked in the business of communications and PR."

Those luncheons became ColorComm Inc., a national platform to advance women of color in business — now nine years and nine cities strong, with hundreds of members and some of the leading brands in media and marketing as sponsors.

I spoke with Wilson for Advancing Diversity podcast episode 12 — which is toplined here and edited for clarity — about the strides made, the ongoing challenges for people of color, and the business imperative for the industry to include them. Listen in its entirety here or on Apple Podcasts, Stitcher, iHeartRadio, or YouTube. It's a conversation we all have to hear, absorb, and act on.

E.B. Moss: You cite a LeanIn.Org and McKinsey study that women of color make up just 4 percent of C-suite executives. And per the #Inclusive100 study, Lynn Branigan and Carol Watson found, sadly, that even with all of the noise that we're trying to make about diversity and inclusion, the percent of women in executive roles, overall, has gone down. How do we put those statistics to work for us?

Lauren Wesley Wilson: There's so much data out there, but it's about action and execution. Where I see companies fail are those that don't line-item a budget around changing this landscape. They spent all their money to get the data, but they haven't allocated money for change.

And what does change look like? Like creating an environment where people feel included. That's not just creating an employee resource group for every ethnic group or gender or sexual orientation to gather. Quite simply, people of color want to feel that they're getting and being positioned for the same opportunities. And that looks like having them in positions where they are driving revenue into their businesses because, many times, those not on the revenue-driving side are the first people to go. It looks like having the opportunities to travel, of being on large accounts, of being valued.

People of color in the agency marketing and advertising space are such a small percentage. So, if a company looks at its numbers and sees just a handful of people there, they need to set them up for advancement. But … as an individual working in the company, you often don't have the skills to know what to do. And that's why organizations like ColorComm exist: to train you, to give you the tools and resources and professional development and skills to understand your role within your company.

Moss: I love that you have formulated an action plan. Tell us more about what we all should be doing.

Wilson: We're focused on four pillars: retention, advancement, new business opportunities, and recruiting. For those already working, being a part of ColorComm is about learning how you can add value into your organization or company; but you first have to figure out what that value is, what that value means to your employer. Bringing in a big account? Being honored for an award to give your company back visibility? Then tapping into that value. We've seen many returns on the investment by being involved with ColorComm….

If you're serious about diversifying your company, you should have a plan in place now because it doesn't happen overnight…. People are hesitant to do it because they believe that the D&I space costs money: "It doesn't bring in revenue. It costs [a lot]. We have to give up money to various organizations." But it's a short-term cost for a long-term gain because you're going to spend the money anyway if your employees who are people of color leave.

I would start with doing a diversity and inclusion audit of your own, because some companies are doing better than others, especially some companies in the communications, marketing, and advertising space. But it's not about "How many people of color do I have at my company? OK, 14; check the box." It matters where they are in their roles and how many are driving revenue into the business…. That will give you an indication of what your future years will look like.

Moss: You've drawn very impressive participants — Gayle King, Ann Curry, Gloria Steinem, Arianna Huffington, Bozoma Saint John, and your board member Shelley Zalis is one of our Advancing Diversity Honors inductees. But you have some impressive supporting companies, too.

Wilson: Yes, like Coca-Cola Company, Nike, ViacomCBS, Comcast.... And agencies like Edelman and MWW, WPP, Publicis Groupe, MSL Group, Ogilvy..., with over 300 million in revenue because they are massive entities with multiple offices, multiple employees, and they really are the drivers of the communications industry in terms of reach, visibility…, and achieving D&I goals. So, we're affecting employees at that magnitude, [with a reach of more than] 40,000 people.

We produce an annual conference, which is coming up on its seventh year. It's a retreat experience with high-level professional development. One Ogilvy CEO said that it's the NFL draft on the recruiting side. So, in terms of … people's caliber, it is quite amazing. But, at the end of the day, we want you to leave feeling more connected and feeling more included in this community that we built.

Applications will be out in April for our fourth Fellows Program. And the ColorComm Next Generation Summit supports the next generation of leaders who are not the demographic to be overlooked ... just because they haven't been at your company for many years. Invest in them now and they will stay, and they will grow. So, to paraphrase Tiffany R. Warren, who says it best, "As you rise, reach back."

Don't stop now! Stay in the know on audio and media industry trends with executive interviews and more from E.B. Moss and on women's advancement and equality in advertising, media, and marketing with more from Women Advancing.