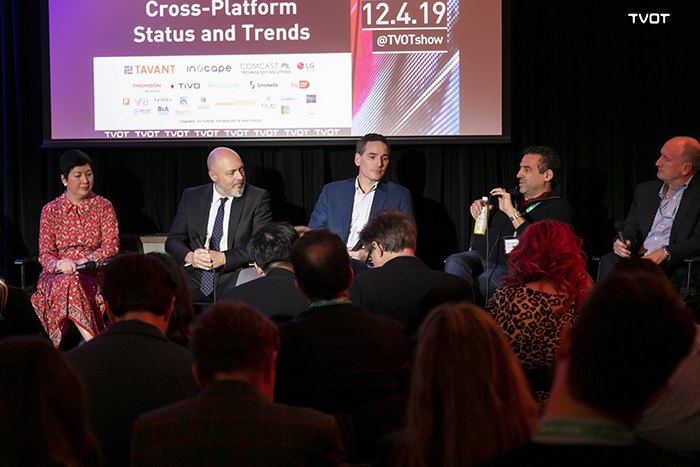 When speakers at the recent TV of Tomorrow Show New York weren't touting the opportunities for addressable advertising, they were exchanging ideas on cultivating advanced TV pathways.  A debate on how local stations across the country will roll out ATSC 3.0 technology and services to viewers, for example, dominated one early afternoon panel.  Later on, a Comcast executive and a content entrepreneur mused about the future of interactive TV storytelling.

For a number of local station owners, next year's deployment of Advanced Television Systems Committee's upgrade technology (under the NextGen TV banner), which can incorporate both Internet Protocol and 5G transmissions, will be a universe-changer in their business.  "You really can pinpoint the consumer where they are," declared Klarn DePalma, president of Meredith Corporation's MNI Targeted Media unit.  "You can reach any [audience] target and attribute, if the client is willing to do it."

Plans on the part of individual station groups call for rollouts inside the top 60 markets by the end of 2020, with the rest of the top 100 markets and beyond engaged with ATSC 3.0 by the end of 2024.  Although consumers may catch on in quick fashion, Sinclair Broadcast Group chief research officer Rob Weisbord suggested that advertising agencies and media buyers may delay their involvement until most of the nation can take the range of new services stations can deliver through ATSC 3.0.

"You need that time to reach everyone because the buying community is not ready," Weisbord said.  "The first thing for stations is to build the brand, then work on the data."

Syncbak chief executive officer Jack Perry urged the station owners to reach the advertising community with updates on how their deployments are coming along, as well as what services they will launch.  "Educate them on the potential for this," Perry said.  "We need to let the buyers know what we are dealing with."

Station owners might want to take a page from the phenomenon of smart TV sets and TV-connected devices over most of this past decade.  That means involving advertisers and ad agencies in the notion that ATSC 3.0 is a learning curve to a big marketplace payoff, said Hulu local advertising sales vice president Jennifer Mock Donohue.  She noted that plenty of "interesting internal discussions" in the short run about the public turning to smart TVs as their main viewing option — currently on the order of more than 10 billion hours a month — have resulted in growing participation with Hulu's ad-supported format.  The Disney-owned venture attracted more than $1.5 billion in ad sales last year and is expected to pull in at least double that amount for 2019.

Once stations deploy NextGen TV, they should be as aggressive as possible to turn local events into content opportunities, Perry said.  "Be on a mission to enable them to do hyper-local content."

Thanks to Netflix's Bandersnatch, the Emmy-winning episode of its Black Mirror movie series, and its reality series You Vs. Wild — followed by the recent launches of Food Network Kitchen, Portal TV from Facebook, and other projects — interactive TV and the overall state of the medium "might be on the verge of our next Birth of a Nation," proclaimed Zane Vella (pictured below, left), Comcast's vice president of product for advertising and interactivity.  "We're way past debate on whether TV is a lean-back or lean-forward experience.  We're now in the lean-forward experience [era].  The question is: [Which way] is the gold mine?" 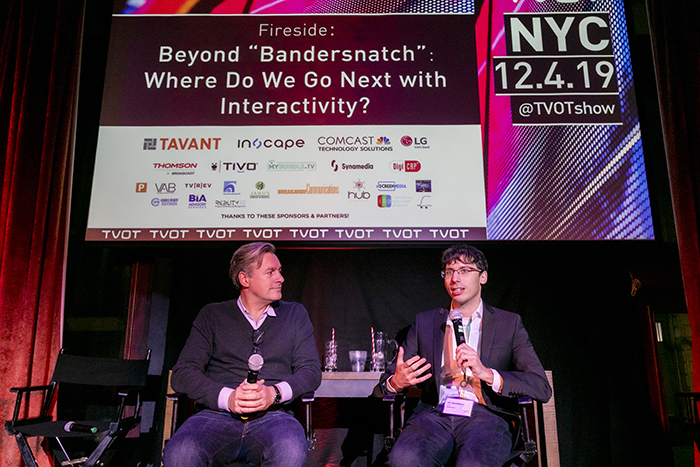 Hovercast chief executive officer Eli Steinberg (above, right) agreed with Vella that ITV is at a "touchpoint" right now.  How fast and far the content ramp goes will depend on putting out engaging experiences that satisfy the audience's desire to control what goes on — and, in time, how things turn out.

"That's a drastic shift in the current landscape," Steinberg said.  "The audience is ready.  Allow people to have meaningful participation.  It's like you have a second writer's room ... have the audience curate your show and make it better so everyone wins."

Just Roll With It, Disney Channel's series where the studio audience dictates what comes next at various points throughout an episode (while cast members are grouped backstage), exemplifies the interactive course Vella and Steinberg foresee.  Disney Channel officials were so delighted with the early viewer reaction to this mix of scripted and on-the-spot improvisation that they approved a live hour-long episode this past October where both studio and home polling were tabulated.  Just Roll will be back for a second season next year.

For both executives, online live-streaming platform Twitch is the direction ITV will pursue in a big way, where both live content and social media-like reaction to it appear side-by-side on the screen, giving producers the freedom to adjust their programming on the spot. "This is where we need to go as an industry," Vella added.