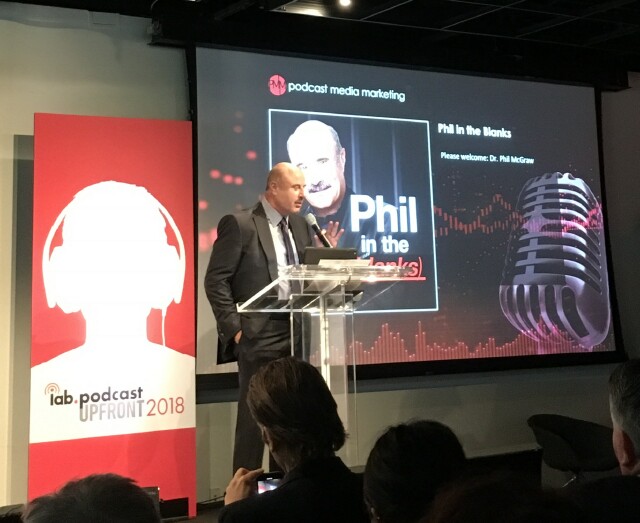 The move from niche to mainstream for podcasting has been a promise for several years.  If the many major media companies touting a slew of new shows at last week’s IAB’s Podcast Upfront is an indication, the time is just about here.  Some would argue that podcast ad spending of $315 million in 2017 is a drop in the media ocean.  Others would point to the projected doubling of those dollars to $629 million by 2020* for a boost in confidence that ad dollars are well spent. And, when freshman podcast efforts for both Ellen DeGeneres and Dr. Phil McGraw are announced in the same Upfront, you can be pretty sure it’s time to dive in.

As podcast listening surges closer to that mainstream level (with 80% YOY growth in total streams and downloads for the top 20 U.S. podcasts, per podcast analytics firm Podtrac), the content has to include both broad appeal topics -- news/talk, sports and true crime that are the given -- and enough niche interests to reach passionate fans.  But the trifecta for winning the podcast race will be greater growth via increased awareness and consumer uptake in order to deliver the scale major advertisers demand, enhanced opportunities for those advertisers and improved data and analytics.

Westwood One President Suzanne Grimes (pictured below) prefaced her pitch for the nascent Westwood One Podcast Network by explaining that last year the company skipped presenting at the Upfront to instead observe and apply learnings.  This year, the gloves were off as the country’s largest radio network revealed an expansive slate of new shows -- from leveraging the hit they’ve had with conservative talk wunderkind Ben Shapiro to something for the consummate “passionate fan”: A podcast on professional wrestling with three-time Wrestling Hall of Famer Jim Ross. 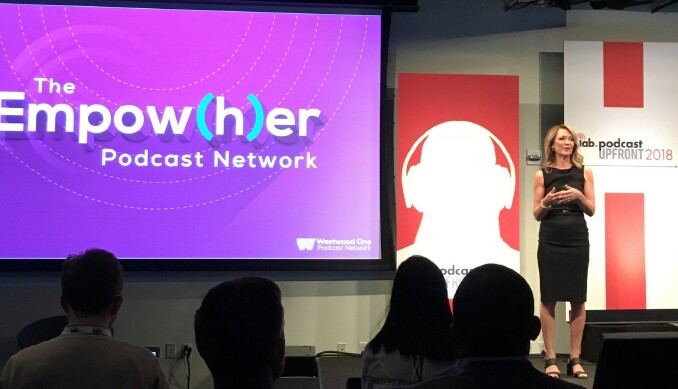 Where they have really doubled down is in the growing audience of female podcast listeners -- a key demographic for brands -- via the launch of The Empow(h)er Podcast Network and its slate of nine shows, including Run Like a Girl, featuring female political candidates, and Suze Orman’s Women & Money Show.  Westwood One is also accessing its country music DNA with the Women Want to Hear Women with Elaina Smith podcast introducing new female artists and interviewing established stars from Dolly Parton to Carrie Underwood.

Grimes, who is also Executive Vice President of Marketing for parent company Cumulus Media, explained that time spent listening to podcasts is up 20 percent year-to-year, and the weekly female podcast audience is growing six times faster than their male counterparts according to their just-released Podcast Download study.  This growth spurt was not lost on the ad community and Empowe(h)er has already signed sponsors, such as meal kit company Sunbasket.

Taking a page from Westwood One research, Wondery is also responding to marketers’ desires to reach more female listeners, launching a new podcast around Ellen DeGeneres’ daytime talk show titled Ellen to Go.  PMM, recently renamed Podcast Media Marketing from Public Media Marketing, has partnered with the also female-friendly Dr. Phil McGraw (pictured at top) for his first foray into the medium, Phil in the Blanks.  And Midroll brought out Jonathan Van Ness of Queer Eye fame for his own podcast, Getting Curious.

Turner is emblematic of a major media company that has entered the podcasting arena in a big way.  Its many popular podcasts – including CNN’s Anderson Cooper 360, Bleacher Report’s Simms & Lefkoe Podcast and HLN’s Unmasking a Killer for the true crime genre -- have been coalesced under the dedicated brand of Turner Podcast Network.  This was boosted by the announcement that all of its 60 podcasts will run on Spotify’s podcast network.  But work with lesser known independent hosts is also percolating.  Where their heft will benefit sponsors is in their incorporation of podcast listening data into the Turner Data Cloud (TDC) – a DMP spanning all the company’s platforms, ultimately enabling programmatic audio.

The Hits Keep on Coming

With bragging rights of longevity and many quarters of chart-topping success among podcast publishers, NPR could school most in the room on success.  The public radio company never stops evolving, however, and has added several new shows to its lineup and brand extensions and event add-ons to tried and true properties.  For example, Ted Radio Hour host Guy Raz also hosts How I Built This, sharing the lessons learned from successful businesses.  It has become so popular that its first all-day summit for entrepreneurs, coming to San Francisco in October, almost immediately sold out.

NPR’s success with podcasting, noted Anya Grundmann, Vice President for Programming and Audience Development, came about by focusing on in-depth “original investigation and storytelling from great public radio journalists and beyond."  Each of them, she noted, “uncovers truths and grapples with questions about what the past can tell us about our world today." One example is the new show Believed, a torn-from-the-headlines investigation into former Olympic doctor Larry Nassar. Another investigative podcast will look at cold case Civil Rights-era murders, while Primer will help listeners brush up on their history with deep-dives into historical events.

Univision – a company with its origins in radio that is coincidentally also a source for audio versions of TED talks via TED en Español -- is upping its digital audio commitment.  President of Advertising Sales and Marketing, Steve Mandala, said the company has had a strong commitment to podcasting since 2016.  Their secret sauce is “knowing the Hispanic community better than any media company knows their audience,” he said.  “We believe that insights-based decision-making and marrying that with the recognizable talent is what makes us successful.”

One such talent, news anchor Teresa Rodriguez, was on hand to remind the audience that podcasts allow the hosts to take their time and build trust with interviewees, bringing out more detail as a result -- much more so than is possible with TV.  Noteworthy new podcasts include Contrapoder,hosted by award-winning news anchor Jorge Ramos; Azul Rosado, which tackles LGBT issues in the Hispanic community, and Mejor Vete, Cristina, about Mexican immigrant Cristina Martizen and her inspiring life story.

Univision is capitalizing on its successful podcasts to expand relationships with brands looking to reach U.S. Hispanics, such as Spanish liquor company Licor 43 advertising on star-hosted podcast Conexiones Thalia as part of an integrated, multi-platform campaign that includes on-and-off premise retail activations, sampling and social media.

A theme of collaboration and “we’re all in this together” continued through the finale “fireside chat” event, when NPR Chief Executive Officer Jarl Mohn was paired with former co-worker from their Viacom days, Bob Pittman, now head of iHeartMedia.  When asked where the next hits will come from, both agreed that it’s impossible to say -- but ongoing effort and experimentation and education is key.