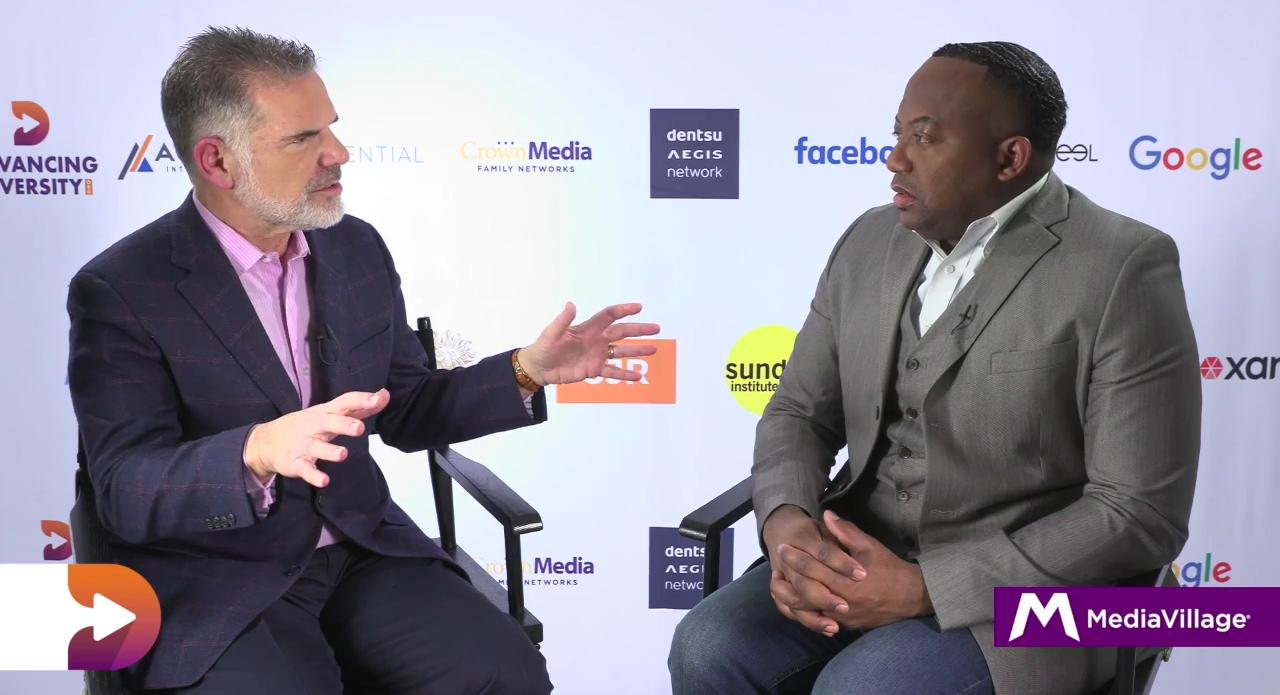 Within organizations, the role of human resources, historically, was to manage talent -- ideally creating a place for confidential support and conversation -- and to manage the hiring process. Today, however, "diversity & inclusion" is in the title for many in HR, thus elevating the mission to an important place. Myers asked Bartley about the evolution of the title, "Can you help identify what that mission is both generically, as you see it across industries, but also at Dentsu Aegis?"

Bartley replied, "First and foremost, for us at Dentsu, the mission of diversity and inclusion is really not just about HR, implementing programs or someone facilitating a process that makes people feel welcome; it's really the responsibility of all of the employees around the world. And we do that through a variety of ways. We have pillars – one is veterans, the other is gender and ethnicity. We also have mental health and LGBTQ. At the end of the day, the idea is that our employees feel very included. There's a sense of belonging. They're not just indifferent because diversity is about all the differences that we have. It's really being invited to the party and ensuring that they count and that they know that they count."

Dentsu Aegis was a leadership partner for the 2019 Advancing Diversity Honors and part of their sponsorship included a series of video interviews hosted by Bartley (see below for links) with inductees and fellow partners at the event. Myers quizzed Bartley about his experience at the event beyond that involvement, "We had a focus in partnership with Sundance Institute Theater Group for a Creative Tensions initiative that was very immersive and inclusive and focused on otherness. What did that event bring out for you? What was your learning?"

Bartley said, "It was a very powerful experience. And the reason why it was powerful is that just in the name of the program: Creative Tensions. I think in the beginning there was a lot of uncomfortability [sic]  with people being singled out or being forced to be kind of in a box, but it was very metaphoric because that is what, when you're a person that's not of privilege, you feel like — you feel like you are essentially in a box."

He continued, "And, to be in a room where you have CEOs and executives and interns…participating in this very collaborative experience about otherness, it went beyond powerful because I think it was that 'Aha' moment where everyone was like, 'wow, this is what it feels like' or 'I remember a time in my life where I felt disenfranchised.' So, it was powerful because it allowed people to reflect, in a way that I think they don't normally." Click hereto hear more about Bartley's take on the Creative Tensions experience.

Bartley remarked that the experience was game-changing because of the personal stories shared by the inductees and participants. He said, "That was invaluable. And I know that was invaluable because we brought our clients there. We had Microsoft there, we had Louis Vuitton, Moet Hennessy, we had ABI… and American Express, of course. We had a wide variety of clients that were there, and the conversation that happened was that 'Oh, I never thought of it that way before.' So, there was this exchange of information about how diversity really impacts inclusion and what you could do to kind of be a part of the process."

To have been at the world's foremost tech conference yet focusing on human emotions was part of the allure, according to Bartley. "And that was the power of it. You're at a tech conference -- one of, if not the biggest one in the world, and it's all about innovation and technology…and we're focusing on emotions. And you're becoming one with yourself and your otherness."

The lasting impact of the Creative Tensions experience was its galvanizing effect on participants to continue the work and the conversation beyond the event itself. Bartley said, "So the question now becomes, 'What do I do with that once I leave there?' And I know for our clients, Microsoft in particular, asked us, 'How can we do this? How can we replicate this in our offices?' And that's when you have that 'Aha' moment. Like okay, this was definitely worth sponsoring this program because it says to our clients that it's in our heart and our soul." To hear more about the business impact of the event for Bartley, click here.

Bartley underscored the need for businesses to embrace diversity and inclusion, not only as a means of engaging changing demographics but also as a means of forging human connections. He said, "It's an important concept because times are changing. And our culture is changing, and we need to really be more inclusive of incorporating everyone as a customer and as a consumer – and understand what that means by understanding what their experience is."

When Myers posited that, "What you learned from that experience is that diversity inclusion is good for business," Bartley replied, "I learned that, but I'll even take it to the next level. It's not just good for business -- it's a must-have. And I think all of those honorees, for me, that was the common thread. There's no longer the 'I'm going to check the D&I box.' It's more so what does that box mean? How do I tie it to revenue and how does it make a difference in my organization?"

The Inclusive Talent Job Fair, which attracted diverse students from across the country, resulted in more than 15 follow-ups with candidates and two on-the-spot job offers by Inductee Madonna Badger, Chief Creative Officer and Founder of Badger & Winters, was a critical component of the evening's success.

Myers said, "And in that context, talent recruitment, talent development, retention are critically important…Over a hundred young people came and drove in from as far as Ithaca, New York or Atlanta, Georgia to Las Vegas to be there to be interviewed by companies like Facebook, Google, Dentsu Aegis, Xandr and many, many others. So, what was your experience as a participant in the job fair?"

Bartley proclaimed the event was more of a meet and greet in that it was organized in a way as to facilitate direct exposure to diversity talent for participating partners. He said, "And that's huge because very often, as I'm sure you've experienced, and we get this a lot, people are asking 'Where do you go to look?' And for us at Dentsu, it was a phenomenal opportunity because we came back with a whole pipeline of candidates that we can now directly look at, evaluate and see where they're applicable to our jobs that are readily available."