By Jeff Minsky Conversations with the Community Archives 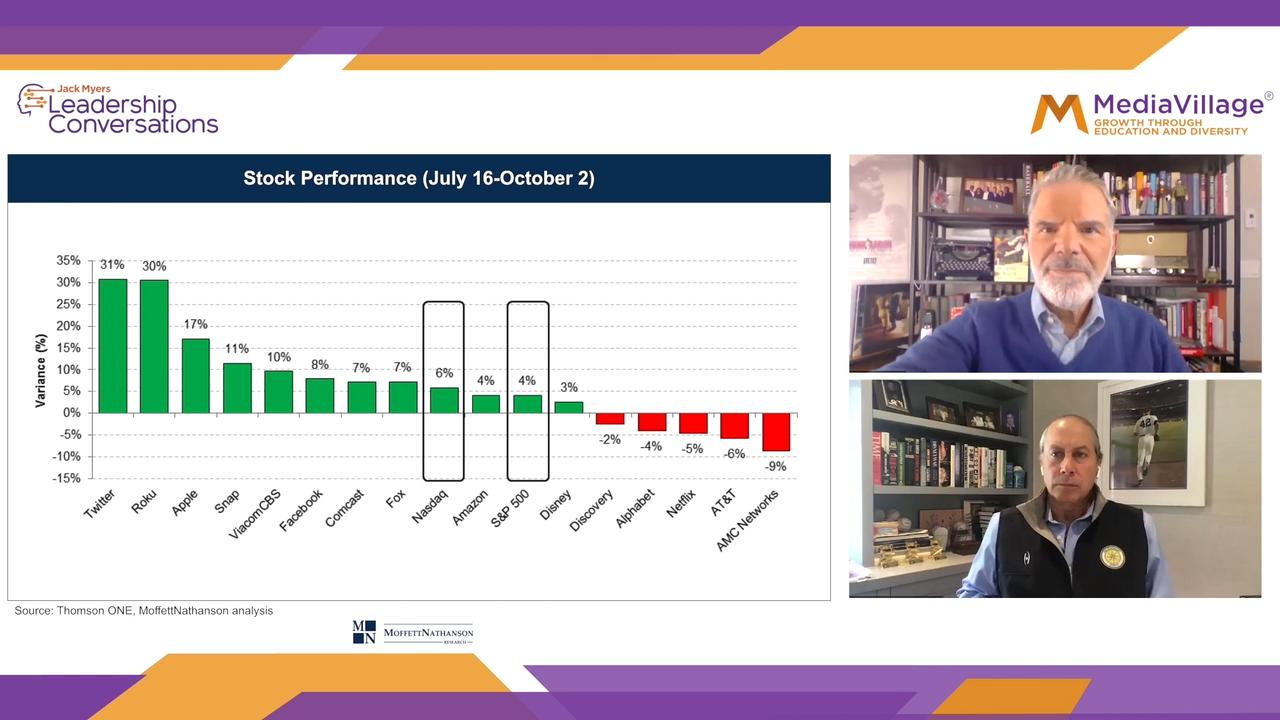 In their third Leadership Conversation since the beginning of the COVID-19 pandemic, MediaVillage founder Jack Myers and MoffettNathanson analyst Michael Nathanson focused on the true long-term impact that several forces in 2020 have conspired to accelerate in an already changing media environment. When historians look back at the truly momentous nature of this year, they will see just how quickly the advertising and media world changed.

Nathanson commented on how in past recessions, the advertising budgets fell greater than the overall economy. That has not happened in this pandemic-triggered recession.

It is traditional linear TV that has been the most impacted with digital proving to be resilient. "I still think with TV our assumption is that it comes out of this more wounded due to higher instances of cord-cutting, more adoption of SVOD and the growth of AVOD," Nathanson says. "Linear TV is fundamentally weaker. We are assuming growth is still negative in Q1 while digital probably gets back to +18%. Basically, back to a growth rate of where it was in Q4 2019. And TV kind of chugs along, maybe -4%/-5% at that point." 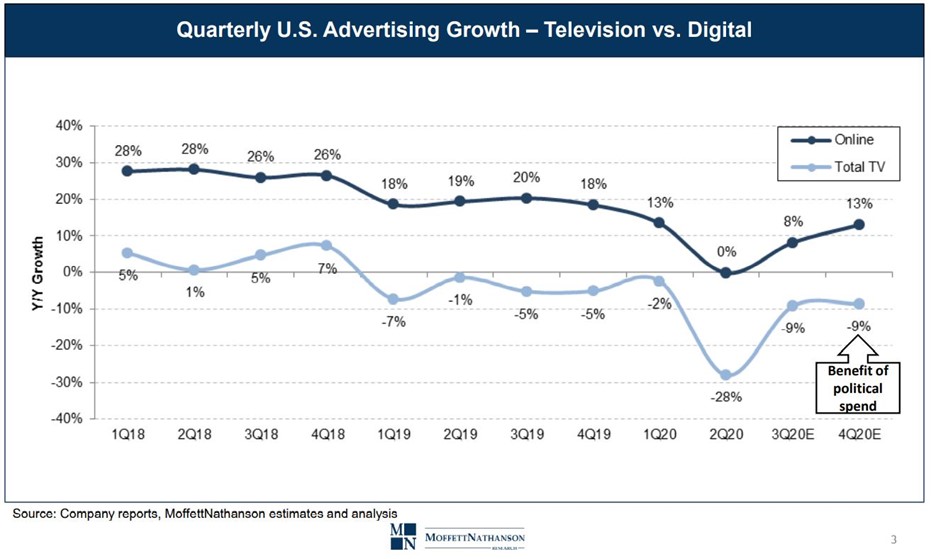 Myers notes that the bulk of growth in digital is coming mostly from what had traditionally been below-the-line budgets such as FSIs, promotions, couponing, etc. "If you take those dollars out of advertising over the past ten years, you'll see an industry that has been declining," he says. "You see the growth of data and media platforms from retailers such as Walmart, Target, Kohl's and CVS, which just announced a media platform, where more of that below-the-line money is going. Our forecasts show that by 2030, total marketing spend will be down by $100B, but advertising spend will essentially be flat. Overall, I fear that we are not a healthy industry."

Nathanson agrees, pointing out that traditional brand marketers that sell through multiple channels are looking to bolster their direct-to-consumer offerings. "Think of brands such as Nike and L'Oréal," he says. "They are pushing to go DTC. All of their in-store marketing, end-caps, POS, that's all going to have to go digital."

Looking at the strengths and weaknesses that the pandemic has illuminated among media companies, Nathanson presents a bold case for the unbundling of content from distribution, a thought that goes contrary to the trend of the past decade. What at first seemed far-fetched, upon reflection feels entirely plausible.

Nathanson can imagine the potential merging of NBCU and WarnerMedia. "We think Comcast could be better served by separating themselves into two, getting NBCU/Sky out of the cable business," he explains. "The company at this point has not acknowledged this as an opportunity, but that is where we see the long-term attractiveness of Comcast; truly unlocking the cable value from this conglomerate. Cable is a very good business."

Turning to a stock that is not high on the list at MoffettNathanson, Nathanson is negative on AT&T. "AT&T is a highly leveraged business," he says. "Their strategy of combining mobile, media, DirecTV has not paid off. In fact, DirecTV has just been an albatross around their neck. At WarnerMedia, their real challenge is about the future. The WarnerMedia asset, or really HBO and Warner Bros., will have a ton of value in someone else's hands. So one of the things we speculate, if Comcast does one day spin out NBCU and SKY, we think Warner Media and NBCU are a great fit. However, you need both AT&T and Comcast to recognize that something has to change."

Turning to 2021, both Nathanson and Myers agree that the dual disruptive influence in 2020 of the pandemic and OTT will have permanent and lasting impact. Nathanson believes that an increase in mergers and acquisitions is inevitable, but can't foresee exactly which companies would be in play as most of the remaining media companies that have not recently acquired or been acquired are family owned. "The Murdochs, the Roberts, John Malone, the Dolans ... same as it's ever been," he notes.

He also believes that there could be a permanent domino effect on the TV landscape as movie theaters do not look to be reopening at full capacity any time soon. The studios, many of which are back in production, will have to start releasing films on OTT channels -- theirs, or others -- to ease the backlog of titles. Per Nathanson, this high-production-value, higher-end content could prove to be a severe challenge to traditional broadcast and cable programming. "Those SVOD platforms will have great content that consumers highly value debuting on their systems," he says.

"Suddenly, that makes the day-in / day-out blandness of primetime TV look like an inferior product."

Myers concurs, adding, "If the advertising media companies do not begin to look actively at alternative business models for relationships with brands and advertisers, they are putting their investments in content at risk. If it comes down to impressions that are not dependent on a welcoming and dynamic content environment that is clear, differentiated and well-defined with audiences that love the content for its own sake, then I fear you are changing the models in ways that will not be beneficial to the industry. Yet we seem to be going down that path."

To watch the entire video discussion with Jack Myers and Michael Nathanson, you can access the content on MediaVillage here.