Taking TV Advertising to the Next Addressable Level 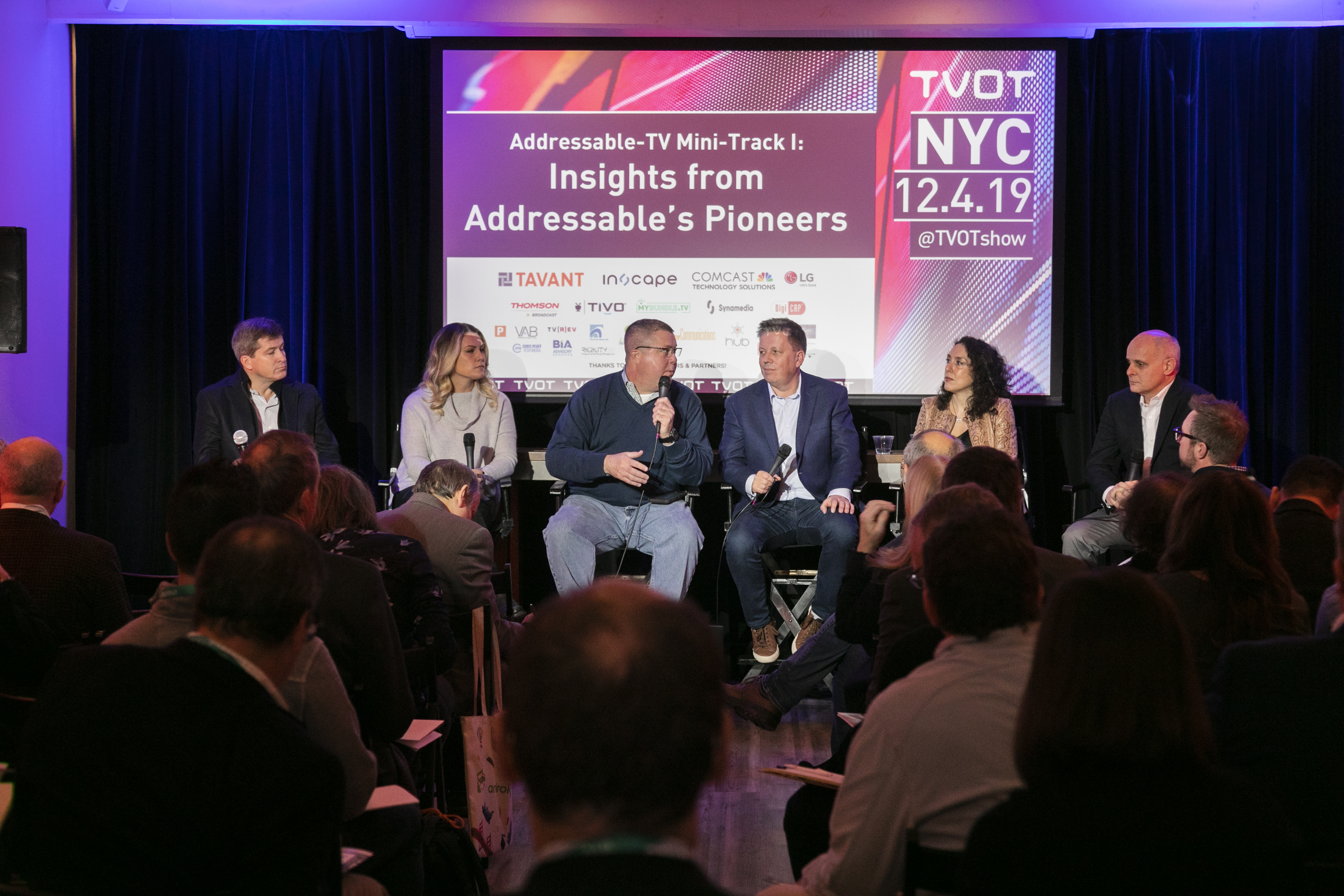 Cable and satellite operators have a new Holy Grail square in their sights when it comes to the addressable advertising side of their business: revenue from addressable ads running within national commercial breaks on their networks.

That opportunity was a focal point of several panels at the recent TV of Tomorrow Show New York.  Using those commercial pods — along with the two or three minutes per hour that many cable networks set aside for local operator sales — would dramatically boost their addressable ad revenues, Comcast Advertising president Marcien Jenckes said during one panel discussion.  For 2019, operators are expected to reap between $1-$2 billion in addressable ad deals.

"For TV to be the most powerful medium around, it needs to involve in fundamental ways," Jenckes noted.  "We're very optimistic.  We're far down the road of deploying [addressable] across a number of network platforms.  Lots of progress, [and] lots of work to do."

Canoe, the operator consortium aiming to generate a marketplace of addressable network avail business, will deploy a number of pilot situations over the first three months of 2020.  Out of the gate, more than one pilot will work with commercial pods consisting entirely of addressable ads, instead of specific portions of a pod (first message, last message, or ads in between).  "That way, the economics are a lot more feasible for a whole lot of people," explained Chris Pizzurro, Canoe's head of sales and marketing.  "The news here is that we can enable addressability for national programming inventory."

ViacomCBS is one of the companies committed to developing a national ad inventory relationship with operators for addressable sales.  "We'll work with them to enable addressability in various ways," noted Sean Coar, senior vice president of data strategy at ViacomCBS.  "In this environment, we have to find value in working together."

For Canoe's marketplace to come together early on in the next decade, a whole host of issues must be settled, several panelists pointed out.  There's the matter of how much national inventory networks can afford to convert into local or regional addressable inventory without impacting their bottom line.  There are logistical and technical issues, from attribution to ensuring that the right commercial for a given demographic plays at the right time.  And there's the willingness of advertising agencies and media buyers to match addressable opportunities with unique, appealing messages.

"Everyone has to get on the same plane," said Sona Mirakian Pehlivanian, New York Interconnect's vice president of addressable campaign management and operations.  "All of the players must work together."

One thing operators and cable programmers should not do in resolving all these issues is follow the lead of key digital advertising players, argued DISH Media sales senior vice president Kevin Arrix.  "We just have to get our [sh*t] together and not play Facebook or Google's game," he declared.

Part of that strategy should include the cable industry providing greater education for ad agencies about the benefits of addressability.  "Agencies are understaffed and trying to work all things out," said Cadent Addressable chief operating officer Jamie Power.  "Addressable comes off [as] mystical … to them and we make it so hard."

Canoe's Pizzurro takes the side of a national inventory of addressable business developing quickly over the next decade.  "I see a new level of cooperation between programmers and cable operators that I haven't seen in 20 years," he said.  "I see significant progress coming in the next two to three years; [more] than we've seen in the last 12 years."

For Comcast Advertising's Jenckes, the breakthrough to a robust addressable advertising market, using both national and local avail pods, will be the formation of an accredited reporting system — plus the ability to deliver addressable spots to multiple networks and platforms, such as smart TV sets and TV-connected devices.  "We want to get to the point of write once, publish everywhere," he said.

Put another way by Ampersand chief technical officer Gerrit Niemeijer: "Whether on smart TVs or other TVs, it should all work the same way."