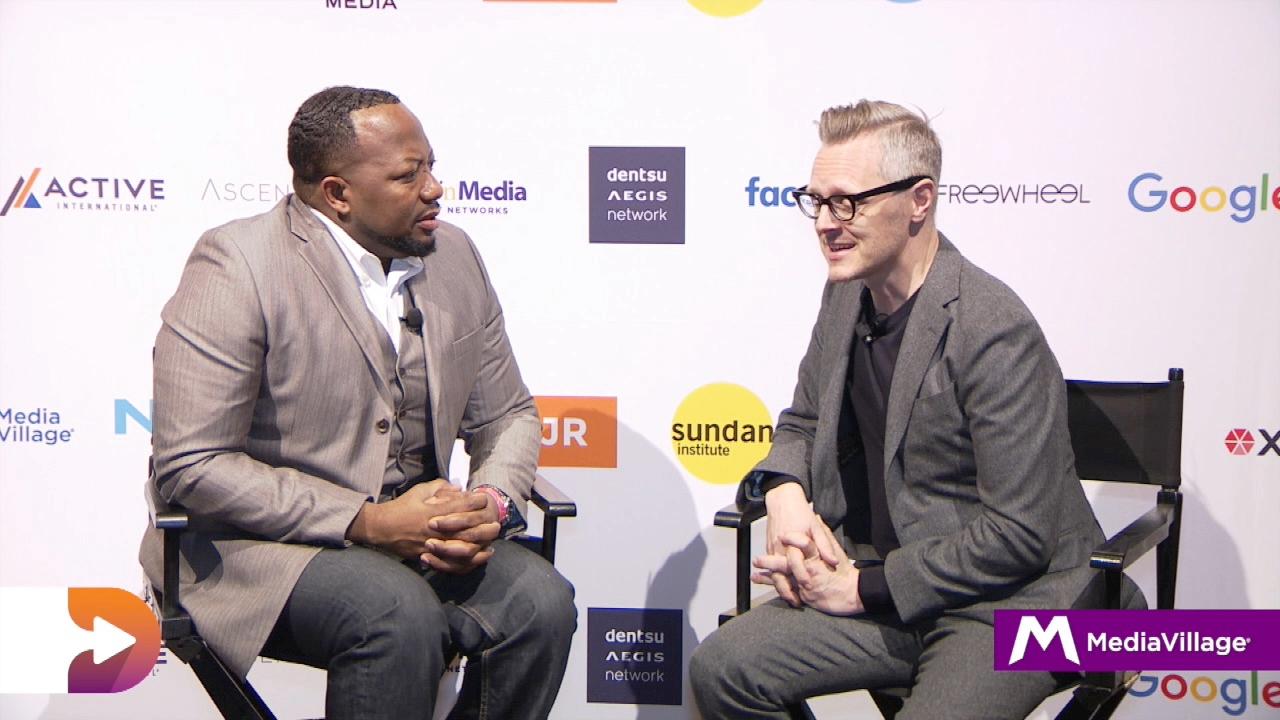 The 2019 Advancing Diversity Hall of Honors Induction Experience, held on January 9 during CES, was a radical departure from traditional awards ceremonies and the high-tech hustle of the trade show.  The event featured an immersive theatrical experience, Creative Tensions, that explored diversity and inclusion through the theme of “otherness,” hosted by Christopher Hibma, Producing Director of Sundance Institute.

Hibma joined DK Bartley, Senior Vice President, Head of Diversity and Inclusion of Dentsu Aegis Network, to discuss the origins of Creative Tensions and its relevance to the Advancing Diversity Honors and CES.  “The Sundance Institute is committed to independent storytelling in a number of forms,” Hibma said.  “Together with some colleagues at Ideo, a global design firm, we created Creative Tensions, which was actually experienced by Jack Myers [Founder of MediaVillage and Advancing Diversity] at the recent Aspen Ideas Festival.  He thought, ‘Hey, this might be something good to throw into the mix here at CES -- a way to have a more meaningful dialogue.’  (Click here to learn more about the evolution of Creative Tensions, the concept of Values Clarification and how the format enables conversations on topics that are “really big.”)

“It’s been remarkable over the last three years since we've developed it to see how immediately people can enter into a spirit of inquiry and respect and dialogue,” Hibma noted.  “I believe Jack has said this before, too.  It’s really about nuance.  It's about embracing ambiguity a little bit.  It's about not sort of digging into our binaries, but about creating a space where we can listen to somebody and be changed because of it.”  (Learn more about the role of Sundance and the theme of “otherness.”)

Hibma described the challenges and art of crafting an experience around a particular theme and creating prompts to drive the story.  “It's a real art form actually to choose a prompt that doesn't have a right and a wrong," he said.  "Both can be right, but they really represent different parts on a spectrum.

"Our expectation for Creative Tensions is that all of the [inductees] will be heard from and that we can have a real meaningful conversation about how they relate to the topic of otherness," he continued.  "Do they perceive themselves as being an other?  Is that a label that they embrace or resist?  Why do they feel that way?  It's more than having sort of a crafted speech about diversity and inclusion.  It's really about getting deep into the heart of the leaders in the media and entertainment.  To really hear from them specifically about how they perceive their own identity.  How they perceive the identity of others.”

The Creative Tensions experience is ultimately about cultivating empathy and connecting to our shared humanity.  “It’s about rubbing shoulders with people who are the same and who are different from you," Hibma said.  "It's about hearing someone else's perspective and really listening.”  (Click here for more on how Creative Tensions creates meaningful dialogue.)