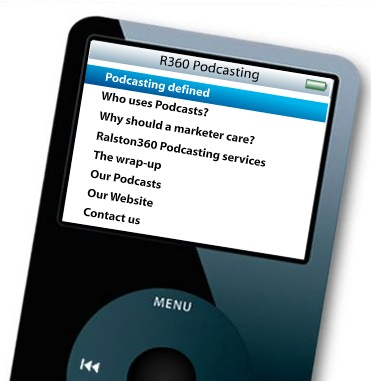 Recognizing that podcasts are a powerful companion to video, a growing number of linear and digital video services are creating podcasts that align with their audiences' tastes. The podcasts cover everything from reality TV stars to history lessons to even iconic sci-fi shows, such as Battlestar Galactica.

In a sea of 800,000 podcasts, these video companies' value proposition for brands and fans is their expertise: If they can parlay hit TV shows into companion podcasts, or use nuggets from TV to create podcasts that appeal to their loyal fans, they stand to grow their audience and generate incremental ad dollars.

"Podcasts bring advertising partners the ability to reach audiences in a refreshing and more personalized way that enables a different type of relationship with the consumer; for example, through host-read ads," says Jason Baron, senior vice president of direct marketing for WarnerMedia ad sales.

As more Americans "cut the cord" and cancel their pay-TV service, cable and broadcast networks must find new avenues to engage audiences, promote their video content, and generate additional revenue — all while streaming services hunt to grow their subscriber counts.

Podcasting offers opportunities to hit all of those notes. As the podcast industry booms, one-quarter of Americans are listening to podcasts weekly, according to Edison Research. And advertisers are projected to spend $831 million in the space this year, per Magna's latest estimates.

For those seeking a roadmap to leveraging podcasting, A+E Networks has charted a strong path. The company, which owns A&E and HISTORY Channel, ventured into the space several years ago, identifying hit shows that could be reimagined as podcasts or enhanced with a companion podcast. One example is A&E's Cold Case Files podcast, now in its sixth season. The podcast takes audio from the TV show to create bonus content. Another podcast, PD Stories, is an extension of hit TV series Live PD and features the TV hosts sharing new stories exclusively for the podcast.

The podcast and programming teams now work closely together, notes Jessie Katz, A+E Networks' director of audio programming and podcasting. "We're connected at every step in the development process, considering what linear series could look like as a podcast, and vice versa," she says. A+E owns content and the intellectual property rights to its shows, allowing for seamless development

Among video-based brands venturing into podcasting more recently, WarnerMedia Podcast Network is at the forefront. The AT&T-owned organization boasts a slate of original podcasts that reflect its networks, including Cartoon Network, CNN, HBO, HLN, TBS, TCM, TNT, and TruTV.

Examples of how they are aligning the networks' expertise and fan interests include the new true-crime podcast from HLN, Down the Hill: the Delphi Murders, an investigation into an unsolved murder mystery, and TCM's The Plot Thickens, about the life and work of director Peter Bogdanovich. On the lighter side, WarnerMedia recently debuted Give Them Lala…and Randall, a talk-show style weekly podcast featuring reality TV star Lala Kent and her fiancée, Randall Emmett, dishing on fashion, lifestyle, and social issues.

Sister sales division, Xandr, has also recently made a foray into B2B podcasts.

One challenge for video companies is getting comfortable with podcast measurement — or the lack thereof. In podcasting, there aren't third-party ratings that linear networks and their advertisers use as currency for media buys. Publishers can see some basic information on downloads and generic demographics, or subscribe to custom studies, such as Nielsen's new Podcast Listener Buying Power service.

Audience reaction can be a guide. When A+E's HISTORY This Week podcast launched, within just two weeks it reached the number one ranking among history podcasts in the Apple podcast app. With that rapid ascent, "we know we're on the right track," Katz says.

Looking for similar hits, other video providers are doubling down. NBCUniversal's SYFY channel — which uses its SYFY Wire website to distribute podcasts — has been rolling out an aggressive slate of new podcasts. These include the weekly show Battlestar Galacticast, which revisits episodes of the classic series, and Forgotten Women of Genre, spotlighting women's contributions to the science fiction world.

Also, at NBCUniversal, the Universal Content Productions is launching the UCP Audio network to create original podcasts, kicking off with The End Up, a scripted series about a retreat for cancer patients seeking to end their lives, as well as a pair of unscripted true-crime shows.

Discovery Networks has said it will add podcasts to augment video on its forthcoming streaming platform. And AMC Networks is building its audio catalog, particularly with true-crime and investigative podcasts for Sundance Channel.

While TV shows require extensive planning and costly production, podcasting allows producers to be nimble and stretch their dollars, UCP President Dawn Olmstead has said. She estimated that it's possible to produce a six- to eight-episode podcast for the same price as a moderate to highly-priced spec script.

"You don't have to build sets, you don't have to wait for availability for actors; you can literally write it that night and be in the audio booth the next day," Olmstead says.

To meet increasing demand from Hispanic listeners, Univision is adding news and entertainment-themed Spanish-language podcasts, including a new podcast to peek behind the curtain of the Premios Lo Nuestro Spanish-language music awards show. Premio Lo Nuestro Podcast features behind-the-scenes interviews and soundbites, and is the first of several podcasts Univision plans to add this year to accompany its high-profile, tentpole TV events.

ABC, CBS, and NBC are adding podcasts at varying degrees, particularly from their news divisions. Even streaming video services are in the mix, with Netflix planning a slate of original podcasts and Apple reportedly developing podcasts to support its new Apple+ original shows.

However, as new podcasts flood the market daily, video services are a little late to the podcast space, and it may take some time to find an audience. To generate buzz, TV and streaming video services can lean on their ability to cross-promote across digital, linear, and social media channels. Also, their seasoned sales teams can leverage established relationships with brand advertisers, bundling audio with existing ad packages or offering it up as an experimental product.

Plus, video loyalists are already showing a willingness to turn their favorite networks into digital audio, notes Trevor Fellows, executive vice president, digital sales & strategy, NBCUniversal. "As we've expanded our brands beyond the TV screen and into the world of podcasting," he says, "we've seen their avid fandoms follow — proving the power of a great story to inspire and engage consumers, as well as drive real results for marketers."

Don't stop now! Stay in the know on audio/podcasting trends with more from Audio InSites and Alli Romano.